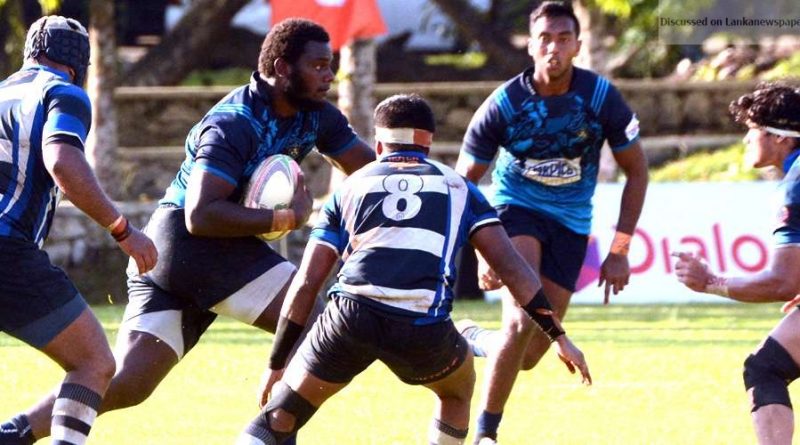 The hosts collected their points through three tries and a last minute penalty while Air Force SC managed only a try, a drop-goal and three penalties.

The scores read 6-5 in favour of Air Force SC at half time.

Charith Seneviratne of Air Force struck first blood as his pin-point penalty kick helped the visitors to take the lead within five minutes on the clock.

It took almost 30 minutes for Navy SC to get the scores ticking but eventually they made it when Skipper Thilina Weerasinghe collected a pass from Buddhima Piyarathne and went on to touch down.

He had a rare off-day throughout the game as the conversion was missed.

In contrast his opposite number Seneviratne had a better game as he slotted a second penalty for the Airmen five minutes later to amend the scores to 6-5.

In the second half Navy SC’s Harsha Maduranga was sin-binned and taking advantage of the extra man on field, Air Force SC struck as they managed to score a try through Fijian Raduwa Kausoo to amend the scores to 11-5.

Gayantha Iddamalgoda extended the visitors’ lead when he dipped in a penalty in front of the posts 20 minutes later, to make the scores read 14-5.

Navy SC pulled off a try immediately when Viraj Colombaarachchi caught the Airmen off-guard as he went on to touch down with ease.

The conversion was missed but the Air Force SC lead was cut to four points, much to the relief of the hosts.

Piyarathne scored Navy SC’s third try five minutes later when the winger collected the ball from a Weerasinghe pass before planting the try, changing the scores to 14-15 after the easy conversion was wasted.

Air Force SC took the lead once again when Ishara Madushan fired a drop-goal in front of the posts, piling more pressure on the home side.

However, Navy SC Skipper Weerasinghe had the last laugh as he managed to slot in a penalty in the dying stages of the game to give his side a close victory.