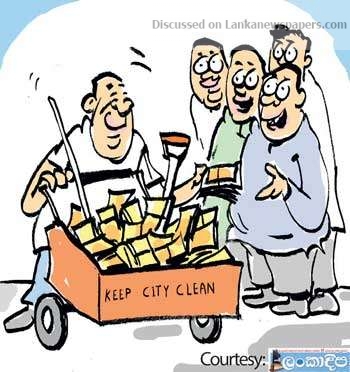 Members of a major local body had reportedly been paid Rs. 200,000 each as hush money by the prospective garbage disposal contractor.
The garbage disposal contractor who had won back the contract under a different name for another period had paid hush money to the members on the understanding that they would not criticize him in future for any lapse on his part in executing the contract.
Meanwhile, a female member who had come to know about the shady deal had threatened to reveal it at a sitting of the local body. However, the members had quickly sealed her lips threatening to expose the skeletons in her own closet if she breathed a word about their affair, they say.