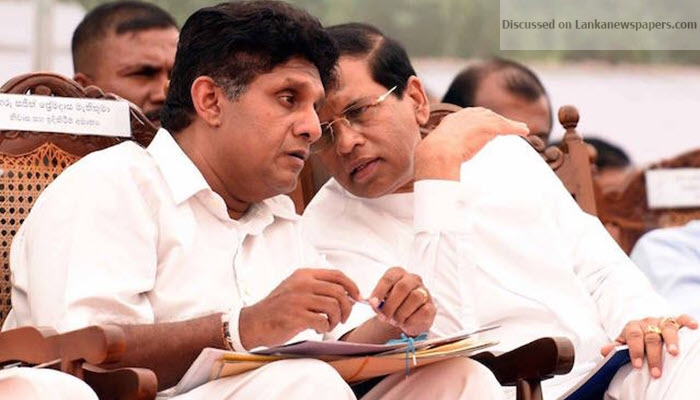 President Maithripala Sirisena yesterday commended Cultural Affairs Minister Sajith Premadasa for his commitment and said he had advised him not to work round the clock but to be mindful of his health as well.

He said he was happy that the Ministry of Culture was allocated to Minister Premadasa.

Speaking at the 2018 Kalabhusana State Festival held yesterday at the Nelum Pokuna Theatre, he said he had come to know that Premadasa could not attend the function as he was indisposed and he was sorry to hear about it.

“I am fully aware of the commitment made to the country and the people by Sajith. He works long hours and has little time to rest. I have advised him to go slow and not to skip his sleep,” he said.
He said that he was happy to see Mrs Hema Premadasa and said that Sajith had fallen ill due to exhaustion caused by overwork.

“I have observed how skilled and a humble person Sajith is and feel the absence of him at this function very much. I wish him speedy recovery,” he said.

During his address President Maithripala Sirisena commended all those who strived to preserve their hereditary artistic values in the field of Art, Drama, Music and Murals.

“It is noteworthy to cherish all the sacrifice and the dedication of those involved in developing our aesthetic values,” he said.

“In the Western countries accepted as developed nations their resources are depicted in buildings put up with cement and boulders, but our country has expounded that by harnessing the ideologies and visions and bringing together the creative artists we could build a much stronger nation. The artists have contributed immensely towards achieving this goal.

The award winning artists of the day received accolades and much praise from the President, who acknowledged that the versatile artists had received awards for their knowledge, their wisdom, skills, their creativity and their capabilities.

“They should be commended for all these cherished values which they have gifted to the nation. He called to mind the contribution of those great Artists of yester years and those who are now immobilized owing to age and or sickness. They should be remembered on this day offer our felicitations. Some move about in wheel chairs or with the aid of someone. They all speak about the destiny of each and everyone in this world. They had left us and the nation with a pride history of our own in the aesthetic field and for this they should be honoured,” he said.