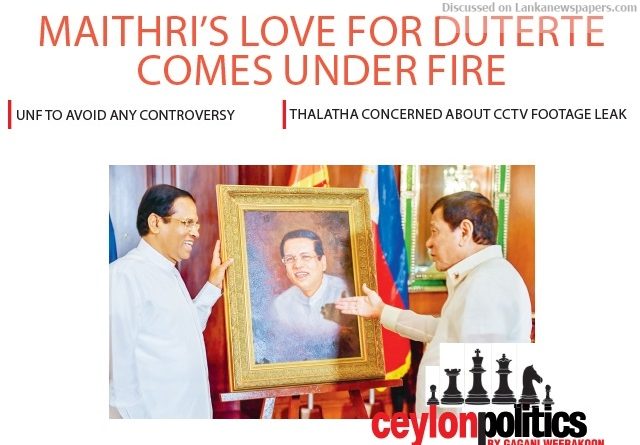 President Maithripala Sirisena, displaying his determination to prevent any chances of bridging the gap between him and UNP, appointed a Presidential Commission of Inquiry to investigate into the Acts of Corruption and Frauds that have been allegedly committed in State institutions during the period from 15 January 2015 to 31 December 2018.

The officers then get the detainees to kneel with their hands held high above their heads and to move forward on the gravelly and sandy path on their knees and to even crawl on all fours, all the while continuing to beat them on the soles of their feet, upper (necks, shoulders) and lower backs, hands, and the frontal upper torso.
Minister of Justice and Prison Reforms Thalatha Atukorale on the Government’s position on the incident regarding the assault of prisoners at the Angunakolapelessa Prison expressed regret if mental hurt was caused to the families and relatives of the detainees (according to the Minister also including convicts and those who have filed appeals) who were assaulted.
Apart from the three-member committee, (comprising two Prisons Department officers, and a representative of the Ministry) that is presently conducting an inquiry at the Prison and whose report is expected before 21 January, a second committee (comprising a Ministry representative, a representative from the Presidential Secretariat, and a representative from the Ministry of Public Administration) has been appointed, whose report is expected by 25 January.

Further, while the entire prison is covered by closed circuit television (CCTV) cameras, the room from which the CCTV camera security system is operated has been sealed, the Minister added.
She further said how the CCTV footage with regard to the incident was leaked to the media would also be looked into and disciplinary action would be taken against those responsible. She opined that the confidential footage should have been brought to her or the Justice and Prison Reforms Ministry Secretary’s notice prior to being given to the media in the event, no action was taken by the relevant authorities.
She observed that based on the reports, not only would she take action sans regard for position and status, but added that if such incidents recur, she would even resort to changes within the Prisons Department top brass in order to restore normalcy.
Speaking at length about the sequence of events leading up to the incident on 22 November 2018, she rejected the claim that on 21 October a protest had occurred at the Prison because detainees being brought back to the Prison after being produced in Courts and prisoners’ visitors had been strip searched, describing it as untruthful.
Explaining further about the claims made about the Special Task Force (STF) searches, she added that on the contrary, the searches were conducted in a disciplined, decent manner.
“In fact, if we are to find out how certain detainees smuggle drugs into the Prison, we would have to do more than strip searches. Therefore, to this end, we have purchased new equipment in the short run. Angunakolapelessa was placed by me under complete STF protection. But they can’t go inside the Prison. They are only stationed at places where detainees and visitors are searched. Male STF personnel search males while women STF personnel search women.

This Prison has become a place most successful in terms of drugs being found. It was certain Prison officers who pushed the detainees to this mischief and a chaotic situation was created by this protest. On 26 October, we identified seven Prison officers responsible for this and transferred them as part of disciplinary action. As we removed them on the same day, we cannot be held responsible for what ensued, which is that the transferred officers had in turn been given transfers to where they wished. Four, including a woman warden, a sergeant and two Grade II jailors are in another prison.”
In the lead up to the events on 22 November, Minister Atukorale said that on 14 November, a suspect (for allegedly abducting an underage girl) produced at the Embilipitiya Magistrate’s Court, who attempted to jump off the Court roof and escape, had been arrested while on 16 November, a convict who received the death sentence for his part in the infamous 1999 Hokandara murder case, was beaten to death with a rock (so that the brain matter had spilled out) by two murder convicts including one who received the death sentence for his part in the Rita John murder case and on 20 November, a suspect had consumed a cleaning chemical and attempted to escape when produced before the Prison Hospital doctor.
She also noted that Courts had previously warned the Prison officers over delays in producing detainees in Courts, delays which she attributed were done purposefully by the detainees in order to inconvenience the Prison officers.
The CPRP on Friday (18) said they would raise the case of the assault of detainees by Prison officers at the Angunakolapelessa Prison on 22 November 2018 at the United Nations (UN) Human Rights Council sessions in Geneva, Switzerland in March.
The CPRP lodged a complaint in this regard at the Human Rights Commission of Sri Lanka (HRCSL). The CPRP will also lodge complaints with the UN in Sri Lanka and the National Authority for the Protection of Victims of Crime and Witnesses.
Election Year
By last week, two of Rajapaksa brothers declared their willingness to contest the next Presidential Election.
Former Defence Secretary Gotabaya Rajapaksa who said he is ready to contest believes that the US could block individual rights as far as the matter of dual-citizenship was concerned as it is something personal.
He said this in response to journalists at the Special High Court premises when they asked him about renouncing his dual citizenship and reports that he may not be allowed to do so.
He said he could either cancel or keep the dual-citizenship as it was something personal.
“It is something personal to me. As a personal matter, I can either get it removed or keep it. No one should make it an issue. No man can be kept tied. The US hails itself as the father of liberal democracy. So, can they obstruct individual rights for any reason? They can’t,” he said.
Meanwhile, Hambantota District UPFA MP Chamal Rajapaksa speaking to the media said that he too is ready for the forthcoming Presidential Election. He said further that Gotabaya Rajapaksa says that if the people are ready, he is also ready to contest for the Presidential poll. If I am also suitable for the post of President, I am also ready for it.
However, United People’s Freedom Alliance (UPFA) Parliamentarian S. B. Dissanayake said picking the presidential candidate is never a priority, forming a strong political front to fight the United National Party (UNP) should be the current priority.
“Given the unpredictable political context, it is impossible make an exact prediction of who will contest the upcoming presidential election, so, let the leaders like our President Maithripala Sirisena and former President Mahinda Rajapaksa decide that. We have two people who contested the presidential election and won, they are experienced leaders, and they know how to navigate us towards 2019 presidential election,” he said.
He said parties such as Sri Lanka Freedom Party (SLFP), Sri Lanka Podujana Peramuna (SLPP), Communist Party of Sri Lanka, Pivithuru Hela Urumaya (PHU), National Freedom Front and Democratic Left Front should make a strong alliance because UNP is infamous for election fraud.
“It will take time to create a strong front; we have time. No presidential candidate has been picked yet. Some say that it will be current President Maithripala Sirisena but our President has not announced such a thing so far,” added Dissanayake.
Meanwhile, the Prime Minister Ranil Wickremesinghe-led UNF Government appears to have taken a precautionary measure to avoid approving any Cabinet paper or taking any drastic decisions that could end in ‘controversies’ during this year.
This was revealed when Health Minister Rajitha Senaratne addressing a special media briefing at the Temple Trees, soon after the Cabinet Meeting. He said: “We will not be approving any controversial Cabinet decisions during this period because this is an Election Year.”
He was responding to a journalist’s query on the ‘crucial meeting’ he had with former Sri Lankan skipper Kumar Sangakkara on a health-related project proposed by the latter. It was said that the meeting between the two went for almost two hours, but the Minister denied this saying it went for little over 10 minutes.
“I told him in a discussion that such a project would need Cabinet approval. But this isn’t the time for such decisions. Because we won’t be taking any controversial decisions during this period as this year is an election year. So, I told him that we can do the project when we form our next Government after the Elections,” he added.
He added that unlike before, he and President Maithripala Sirisena are in two different political camps.
“There are certain political differences between me and the President. Both of us came from the same side, but now I am on one side, whilst he is on another side.

But I will give good competition from my own side without any fear or doubt. When the President asked me about this decision to bat for different sides, I clearly told him that because he is now with Pohottuwa camp which tries to create factions in the camp where I am, I will also give my full strength to break and defeat his camp,” he added.