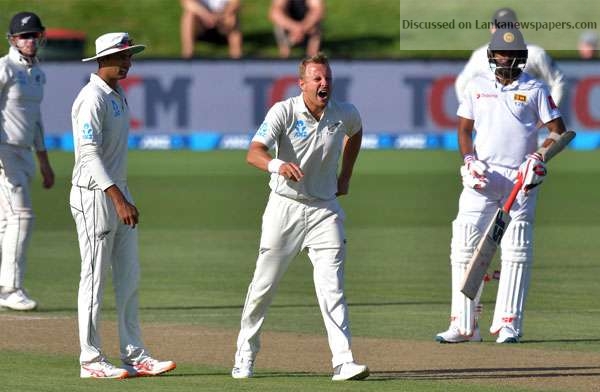 New Zealand celebrate a historic victory Sunday when they needed just 14 balls on day five to demolish SriLanka by a colossal 423 runs in the second Test in Christchurch.

“That’s quite a cool thing to achieve,” skipper Kane Williamson said, reflecting on New Zealand winning a fourth consecutive series for the first time in their 88-year Test history.

“That’s wasn’t the focus, and if we do reflect on that a little bit, the positives of the different conditions we’ve experienced, the different opposition all come into the fact we’ve been able to get across the line and that makes it quite special.” The victory over SriLanka, by the biggest ever margin for New Zealand and eighth largest of all time in terms of runs, followed back-to-back series wins against the West Indies, England and Pakistan this year.

SriLanka, having been set an improbable 660-run target, resumed the final day at 231 for six and lost their first wicket with the third ball of the morning when Trent Boult bowled Suranga Lakmal for 18.

Neil Wagner removed Dilruwan Perera for 22 before Boult ended the innings with the wicket of Dushmantha Chameera in the third over of the morning.

Angelo Mathews, who retired hurt when on 22 on Saturday, did not resume his innings. After a placid pitch and rain saved SriLanka in the first Test in Wellington, the weather and wicket in Christchurch were ideal for the decider.

SriLanka won the toss and had New Zealand six for 64 before a whirlwind 68 from man-of-the-match Tim Southee lifted New Zealand to 178.

SriLanka were cruising towards that target until a purple patch from Trent Boult whose six wickets for four runs wiped out the lower order and the tourists were all out for 104.

Tom Latham’s 176 and an unbeaten 162 by Henry Nicholls saw New Zealand declare at 585 for four in their second innings, leaving SriLanka more than two days to survive. When Kusal Mendis and Dinesh Chandimal were at the crease they had a faint hope, but a stunning catch by Matt Henry broke the stubborn partnership.

“That was the key moment,” Williamson said of Henry’s diving catch at extra cover to remove Mendis for 67 off the bowling of Neil Wagner to end a 53-over stand.

The remaining seven batsmen only lasted 50 overs in total and contributed 110 runs.  “He came on and perhaps being a sub fielder you’re not quite feeling the rhythm of the game and it can be disruptive,” Williamson said.

“Perhaps he was in the right position or the wrong position, we don’t know, but it went to him and he was fresh as and it was kinda cool.” Wagner, who had struggled for wickets earlier in the series, found the Christchurch conditions to his liking and took four for 48. Boult finished with three for 77. SriLanka captain Chandimal blamed his side’s “disappointing” efforts from his batsmen in the first innings of both Tests.

“We just have to improve,” he said as SriLanka prepare for three one-dayers and a Twenty20 against New Zealand before moving to series in Australia and then South Africa.