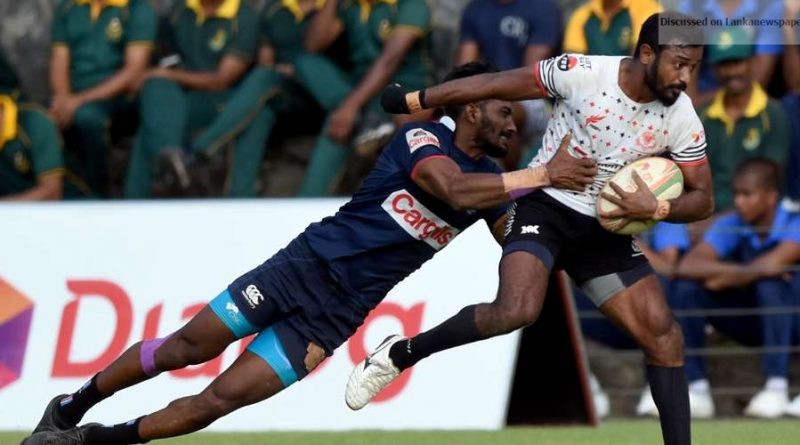 In what turned out to be a close game, CH & FC managed to beat Police SC 29-24 in their Dialog Rugby League 2018/19 matchweek seven fixture played at the Race Course Grounds today (23).

The home team held the upper hand for most of the game before a spirited final ten minutes saw Police coming close to creating a major upset. A series of attacks by the Police outfit, which proved to be just not good enough, and a pretty solid defense, saw CH hold on to the much needed win.

Police’s Yohan Pieris kicked off proceedings under the sun in front of the packed crowd.

It took just five minutes for CH to break the deadlock when Skipper Yoshitha Rajapaksa collected the ball off a scrum close to the try line and went over. Samuel Maduwantha, who had his lucky boots on, added the extras with ease.

After Police missed an easy penalty right in front of the posts, CH were able to double their lead when Jason Melder planted the ball over the line. With the conversion, the scores were 14-00.

Police were awarded a penalty almost immediately, which was put over successfully by Pieris.

Scrum-half Suranga Kasun managed to reduce the deficit when he was able to get past the CH defense to touchdown following a long string of attacks by the Cops, amending the scores to 14-10.

Police were dealt a blow when Hooker Rasith Silva was sin-binned, and the penalty that followed was successfully sent through the posts by Maduwantha, setting the scores to 17-10.

Naveen Henakankanamage, collecting the ball from Hirantha Perera, managed to pull off CH’s third try of the evening, as he went over the line at the edge of the field.

Police found themselves fiddling close to the try line with minutes left of the first half, but the CH defense was able to keep them at bay, before Referee Dinka Pieris blew for half-time, with the scores set at 24-10.

Sudam Sooriyarachchi put on a blistering run as he eluded the Police defense to score a brilliant try with just three minutes on the clock after play was resumed. Perera, taking up the kicking duties from the injured Maduwantha, missed the conversion.

With a healthy 19-point lead, CH looked as if they could record an easy win, but the visitors had other ideas.

Police kept attacking, while enjoying a majority of possession, but could not capitalize on their chances.

They were finally able to score in the 20th minute, when Fullback Sachith Silva collected a beautiful offload from Kasun to go over the line. The extras were added, setting the scores to 29-17.

Ten minutes later, the Cops managed to record their third try when the hefty tight-head Danushka Edirisuriya dragged himself over the line with the ball. Janith Chandimal was successful at the conversion, and the scores were amended to 29-24.

With less than seven minutes left, Police kept attacking, giving CH loads of pressure. With a throw-in and a scrum close to the try line, they had enough of time to take the lead, but failed agonizingly. The CH defense, on the brink of falling apart, somehow managed to keep the Cops away from scoring as they held on to the hard-fought victory in their final game of the year.