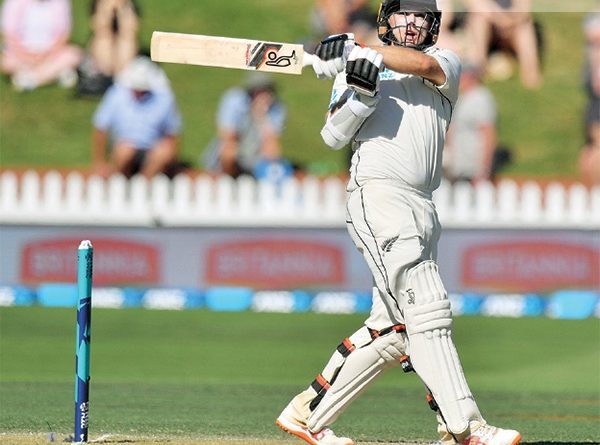 Opener Tom Latham’s unbeaten century put New Zealand in charge of the first Test against Sri Lanka in Wellington on Sunday, as the Black Caps raced past the tourists’ first-innings total and looked to build an imposing lead.

Latham was 121 not out at stumps on day two with New Zealand cruising at 311 for two in reply to Sri Lanka’s modest 282.

It was a frustrating day for Sri Lanka’s bowlers on a Basin Reserve pitch that transformed into a batters’ paradise after wreaking havoc during the tourists’ innings on day one.

Black Caps skipper Kane Williamson narrowly missed out on his own century, falling for 91, and all New Zealand’s batsmen got good starts, with Jeet Raval making 43 and Ross Taylor not out on 50.

While the Sri Lanka attack worked hard, they could not build pressure and the two New Zealand wickets that fell were the result of rash shots from Raval and Williamson.

That was not an issue for Latham, who meticulously crafted his seventh Test century from 219 balls and never looked rattled at the crease.

He combined with Williamson for a 162-run partnership, laying the foundation for a huge total from a line-up that has eight wickets in hand and has plenty of batting to come.

“Hopefully we can bat for a big chunk of tomorrow and we’ll just bat once in the game, that’s the plan,” he said.

“We’ll try and make the most of these conditions as long as we can, then we’ll see where we get to tomorrow afternoon and maybe have a wee bowl at them.

“There’s a lot of game to be played before then.”

Despite failing to reach triple figures, Williamson still has a remarkable record against Sri Lanka, with three centuries in seven Tests against them.

That includes an unbeaten 242 at Wellington’s Basin Reserve in 2015.

Sri Lanka will be hoping for a dramatic New Zealand collapse on day three to salvage any hopes of a win.

Earlier, they added just seven to their overnight total before Tim Southee coaxed an inside edge off Kumara to claim a six-wicket innings haul.

Kumara’s departure for a duck left Dickwella stranded on 80 not out after he led a rearguard action for Sri Lanka.

Angelo Mathews and Dimuth Karunaratne were the only other batsmen to offer any meaningful resistance, notching 83 and 79 respectively and forging a 133-run partnership.

They have faced upheaval in their coaching and selection ranks in recent weeks and arrived in New Zealand low on confidence.

In contrast, the fourth-ranked Black Caps entered the two-match contest buoyed by their first away Test series win over Pakistan in 49 years.