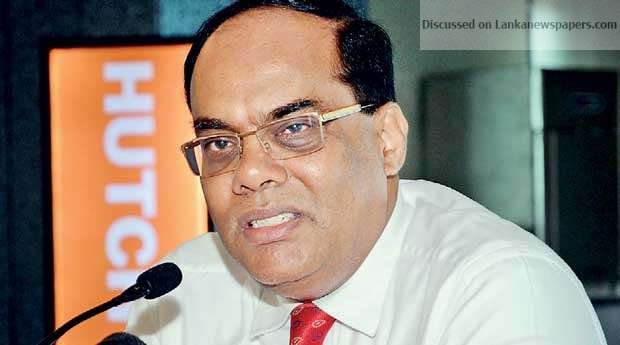 Hutch Telecommunications Lanka (Pvt.) Ltd plans to invest in excess of US $ 200 million over the next five years following its recent merger with Etisalat Lanka (Pvt.) Ltd to roll out a nationwide 4G network and support the growth of data and broadband in Sri Lanka.
“In the next 12 months we will be building up a network comparable to both Dialog and Mobitel,” Hutch Lanka CEO Thirukumar Nadarasa told reporters in Colombo, yesterday.
He said Hutch and Etisalat will start combining their 2G and 3G networks shortly into one big network, which is on par with the networks of the current market leaders. What follows will be a brand-new nationwide 4G network, which Hutch has already launched in the Western Province.
Nadarasa also said subsequent to the merger, Hutch Lanka now has about 2,500 towers across the island. However, he noted that some of the towers might be shut down, considering their proximity, in a bid to use the available resources optimally.
On November 30, Etisalat Lanka’s parent, Emirates Telecommunications Group Company (Etisalat Group), completed the sale of 100 percent shareholding in Etisalat Lanka to Hutch Lanka.
Upon the completion of the sale, CK Hutchison Holdings Limited, the parent of Hutch Sri Lanka, now holds 85 percent of Hutch Lanka, while Etisalat Group has a 15 percent stake with one board seat.
Nadarasa said the merger would result in Hutch Lanka’s market share in the local cellular market going up to over 20 percent.
Market leader Dialog and number two player Mobitel command about 70 percent market share with extensive 2G, 3G and 4G market infrastructure.
Bharti Airtel’s Sri Lankan unit, Bharti Airtel Lanka, which commenced operations in 2009, remains as the fourth player with about 10 percent market share.

Meanwhile, Nadarasa said Hutch Lanka, which currently has about 350 staff, would absorb the full 500 staff of Etisalat Lanka and would not be offering any voluntary retirement schemes.
The merger will also result in Hutch getting additional spectrum on certain frequencies.
All mobile operators in Sri Lanka have spectrum on three frequencies—900 MHz, 1,800 MHz and 2,100 MHz.
Nadarasa said the combining of spectrums of Hutch and Etisalat on the 2,100 MHz band would result in supporting more customers on a tower or a base station, which in turn would help to deliver affordable services to customers.
However, he said Hutch Lanka agreed with the telecom regulator to release 5 MHz of their combined 15 MHz spectrum on the 900 MHz band as part of the merger approval, which is still 2.5 MHz higher than other players.
“When we move into 3G and 4G mobile broadband, it is very important that we must have a minimum block of spectrum to make efficient use of the infrastructure and resources. We pointed this out to the regulator and they allowed keeping us 10 MHz,” Nadarasa said.
On the 1,800 MHz band, Hutch Lanka has less than other operators.
Meanwhile, Nadarasa said the customers of both companies would continue on current tariff plans unchanged and any changes would be based on the on-going business review.
Further, Hutch Lanka will continue to retain and support both 078 and 072 numbers and assured that there would not be any change to the mobile numbers of the existing customers.