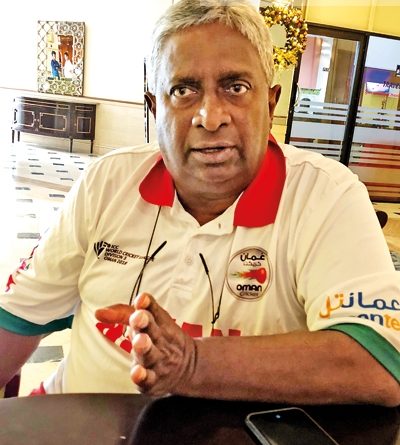 Six years after former Sri Lanka skipper Duleep Mendis undertook to lift the standard of cricket in Oman, a team predominantly consisting of working expatriates, are now on the verge of gaining ODI status.

This will be a huge milestone for a country whose cricketers are not even semi-professional. Mendis believes, come April, his charges could create history by finishing among the top four in the WCL Division II Championships in Namibia to earn limited-over status.

Mendis is currently in Sri Lanka with the Oman national team. They are among four other teams, including Sri Lanka, competing in group A playing in the Asian Cricket Council Emerging Teams Cup tournament.

“To get the ODI status from nowhere is a huge thing and I am sure everything will change after that,” Mendis said. “Already, their companies are offering them a lot of encouragement. They are giving them leave because they see the national team doing well. And if we can get ODI status next year, that will be a landmark for cricket in Oman. It is what Oman cricket needs at this time”.

Oman, who won the Division III titles few days back, only need to finish among the top four teams in the Division II Championship to earn ODI status. During the Division III tournament played recently in Oman–where USA , Singapore, Uganda, Kenya, Denmark and Oman competed–they beat all the sides to become the champions.

“But the moment you go to the upper league, systems will have to change,” he reiterated. “I don’t think the companies would like to allow their players to play 205 days of cricket a year. This is where Oman Cricket will have to introduce professional contracts to these players. Of course, we have contracted them at present for small amounts . But they still have to work to earn their bread and butter.”

How did Oman make such impact within a short period of time? He made the player believe in themselves, Mendis said, while also helping them with improved infrastructure and facilities, setting standards in coaching and umpiring.

“Oman is passionate about football,” he observed. “Cricket is mostly played by expatriates from India, Bangladesh, Pakistan and Sri Lanka. When I first saw them, I could see the cricket in their blood. They had the techniques but were low on confidence. What I did was to help build their confidence. They soon started producing results.”

“These players are in Oman for work,” he related. “So coming off early for practices is out of the way. But when the team started to produce results, their employers were very supportive. Now we have early morning and early afternoon practices.”

Mendis thinks one of his biggest achievements in Oman is the improvement of cricketing infrastructure. They now have two green grass grounds and a state-of-the-art indoor training facility, a vital addition in the quest to achieve excellence.

“When I started, they didn’t have any green pitches there,” he said, adding that the two new grounds are similar to SSC. “Then, we have a fully-equipped indoor training facility with two fast wickets, three normal wickets and two slow wicket.”

Unlike in Sri Lanka, where there is a strong school structure, cricket is hardly played in Omani schools, except in those run by expatriates.

“This is one of the biggest problems we are facing,” Mendis admitted. “Even those who play cricket in schools go for higher education to other countries. So we don’t produce that many cricketers.”

In total, there are 95 teams playing in different domestic cricket tournaments with five in the Premier Tournament and 10 in Division I, the two top tournaments in the country. While they play 50-over cricket on grass tracks, other teams play 20 over games on astro-turfs.

Mendis started off on a consultancy after finishing his tenure with Sri Lanka Cricket. He first signed a two-year contract with the Board and continues to work as their Chief Director Coaching, helping Oman realize their dream. He said they had professional coaches specialized in different areas and trainers on short-term contracts in the past but are now thinking of enlisting a professional coaching set-up on full-time basis.

“Along the way I realized that there were certain things lacking,” he reflected. “Until Alex Kountouris came in before the World Cup in 1996 in Sri Lanka, we did not know what was needed for physical training. Alex introduced certain things which were very useful in developing cricket.”

“The same things were lacking in the (Omani) ODI team,” he pointed out. “So we introduced those elements and now it’s a different side altogether. I got Ruwan Kalpage as Fielding and Spin Coach on short-term basis. Also we had Rumesh Ratnayake as Fast Bowling Coach before he joined Sri Lanka Cricket. We also have a South African qualified trainer working with us on short-term basis initially. But we’ve come to a stage where we need to settle down with them for a long-term.”