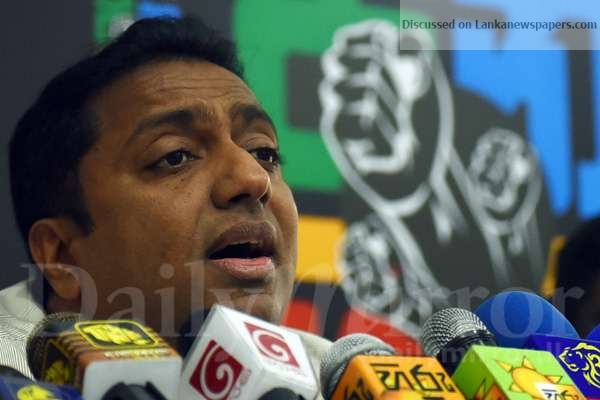 The United National Front (UNP) and its allies have decided to hold a series of protests and a death fast against what it called an unconstitutional instate of a new government, UNP General Secretary Akila Viraj Kariyawasam said yesterday.

He told a media briefing that the UNF and its allies would stage a protest in Kandy on November 24, in Kalutara on November 27, in Colombo on December 3 and at Kiribathgoda on December 4 2018.

Mr. Kariyawasam said state officers who approved spending for the new ministers would have to be answerable for their illegal acts. “There is no legal value for the spending carried out by the ministries as there is no government at the moment as announced by the Speaker,” he said.

UNP MP Ajith P Perera said the trade unions and professionals allied to the UNF would hold a Sathyagraha at the Vihara Maha Devi Park today and would be converted to a death fast if the need arises.

Defending the decision to submit a motion to stop the expenditure head of new Prime Minister Mahinda Rajapaksa, Mr. Perera said it was fully legal as it is Parliament which has the power over all spending as per Article 148 of the Constitution.

“Minister Wimal Weerawansa has challenged us to show majority support and we asked for an appointment from President to do so. However, we have not been allowed to show the majority in the form of affidavits and our physical presence,” Mr. Perera said.