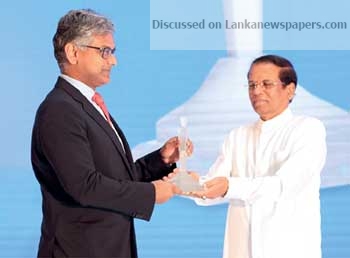 Last week’s repurchase offer by John Keells Holdings PLC was influenced by the company’s institutional shareholders, some of whom had requested it in the context of a tumbling share price in a depressed market, well informed sources said.

Analysts said that JKH’s cash reserves now stood at a little under Rs. 50 billion. The repurchase offer is valued at a maximum of Rs. 11 billion covering the cost of approx. 69.38 million shares.

JKH is about 50% owned by foreign shareholders with the balance being held by local interests led by Mr. Sohli Captain who is the biggest single shareholder owning 10.3% of the conglomerate according to its latest financials covering the period up to Sept. 30, 2018.

“A share repurchase makes a great deal of sense for a company at a time when its share price is down,” a well informed analyst said. “As such, now is a good time to comply with a request made by some of its major shareholders.”

The Harry Jayawardena controlled/influenced Melstacorp has now increased its stake from the 4% listed in the September financials to around 7.5% has been the most aggressive local buyer of foreign-held JKH shares transacted recently. In the previous financial period it held 3.5%.

In a stock exchange filing last week, JKH announced the repurchase on the basis of one share to be repurchased of every 20 shares held as at the close of trading on Dec. 3 at a price of Rs. 160 per share.

Although the JKH share traded at Rs. 152.90 on Friday, up 60 cents from the previous close, it had gone down to below Rs. 140 in recent weeks. The counter’s all time high was Rs. 430.25 many years ago while its all time low was Rs. 8.75 decades ago. There have been rights and bonus issues since then.

JKH, the biggest market capitalized company quoted on the Colombo Stock Exchange, has long been regarded as the main proxy for the Sri Lanka share market where it has been the most liquid and most traded share over a long period.

During the market downturn in recent weeks foreign shareholders have been both on the buy and sell sides on JKH.

“Further, the strength of the JKH Balance Sheet, along with existing cash reserves, is more than adequate to fund the company’s planned investment pipeline while retaining its track record of dividend payments.

An interim dividend of two rupees per share will be paid tomorrow.

JKH said that funding for the ongoing Cinnamon Life property development project overlooking the Beira Lake, the biggest ever single investment of the group, “is fully secured” and funding is in place for all planned investments across its core verticals over the next few years.

It was confident that it will continue to hold healthy cash reserves and balance sheet flexibility after the repurchase to pursue further investment opportunities as they arise.

Analysts expect that the number of shares offered under the repurchase will depend on the JKH share price in January with the offer due to close on Jan. 10. Whether the Harry Jayawardena interests will chase the share will also be a factor, they said.