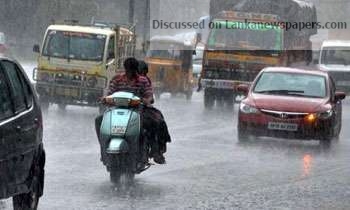 Nearly 647 people were affected while six others had gone missing when the bunds surrounding six irrigation tanks in the Mullaitivu district had breached because of the heavy rains that lashed the area.

The Disaster Management Centre (DMC) said personnel from the Army and the Air force were engaged in rescue operations.

In the meantime, the residents in Kumalamunai said no information had been received regarding a father, mother and a child who lived close to the wewa and no information about three farmers who were engaged in cultivation.

In a separate incident the DMC said six people who were marooned by flood waters were rescued yesterday and warned that the entire village would be submerged if the rains persisted.