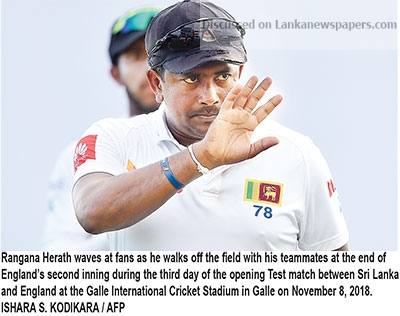 Sri Lanka’s batsmen will do well to borrow a leaf out of England batsman Keaton Jennings’s book as the their unblemished record in Galle against England is in danger. South African born opener and the son of former Proteas Head Coach Ray Jennings batted for over six hours in compiling his second Test hundred yesterday.

Set an improbable target of 461, Sri Lanka openers saw off the seven overs without losing their wickets. They trail England by 447 runs and no team has chased that many to win a Test match in the history of the game. The realistic target for the Sri Lankans would be to take the Test match to the fifth day and then with a bit of help from rain they could travel to Kandy with their record unscratched.

A paltry first innings total of 203 runs and conceding a first innings lead of 139 runs put Sri Lanka behind the game and England could dictate terms in their second innings and soon Sri Lanka went on the defensive.

In the absence of captain Dinesh Chandimal, who is nursing a groin strain, they were led by Suranga Lakmal. Chandimal, who went for a MRI scan yesterday will bat in the second innings but could be ruled out from the series depending on the seriousness of the injury.

Sri Lanka took three wickets in the morning session and could have had a fourth but they failed to review after Jennings was ruled not out when Dhananjaya de Silva appealed for a leg before wicket dismissal. Jennings was on 58 at that point.

He added 109 runs for the fourth wicket with Ben Stokes, who hit a few meaty blows on his way to 62 off 93 deliveries with four fours and three sixes.

A 74 run stand with Jos Buttler followed for the fifth wicket. Niroshan Dickwella had been very tidy behind the stumps but yesterday missed a stumping chance with Buttler on 11.

First innings hero Ben Foakes (37) added 61 runs for the sixth wicket with Jennings as England tormented Sri Lanka at a venue where they have had little success over the years. The declaration came with the total on 322 and Jennings was on 146 not out. He faced 280 deliveries and hit nine fours.

Rangana Herath and Dilruwan Perera finished with two wickets each while Akila Dananjaya continued to struggle. Herath finished with 433 Test wickets and in the process went past the tally of Sir Richard Hadlee (431).