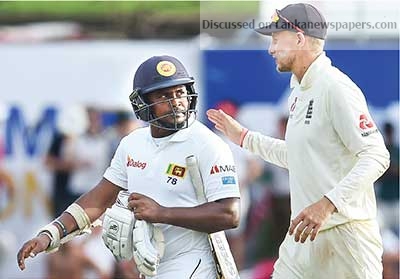 Galle’s heat and a pitch that turns square are the reasons why England don’t fancy playing here much. They have never won a Test match at this venue which has been a fortress for Sri Lankan cricket but all that is set to change over the next couple of days as the tourists took a firm grip of the first Test taking a lead of 177 runs at stumps on day two.

Debutant Ben Foakes has been England’s hero.  At 103 for five on Tuesday, England were doomed in Galle once again. But the Surrey wicketkeeper stitched some valuable partnerships with the tail to push the total to 342.

Resuming on the overnight score of 87, Foakes completed a maiden hundred with last man James Anderson at the other end. He became the seventh batsman to score a hundred against Sri Lanka on debut.

A last minute replacement for the injured Jonny Bairstow, Foakes faced 202 deliveries and hit ten boundaries during his knock that was 11 minutes short of five hours.

None of the Sri Lankan batsmen possessed Foakes resolve as they lost four wickets before lunch. There were a series of poor shots with Dhananjaya de Silva’s attempted paddle sweep off Moeen Ali with 12 minutes to lunch being the most bizarre one.

A 75 run stand followed between Dinesh Chandimal and Angelo Mathews but Adil Rashid broke the parternship before it started hurting England. Rashid cleverly brought Chandimal out of his crease and let Foakes do the rest

Mathews had played well for his 30th half-century but was slowing down before tea. He was dismissed immediately after the break for 52. Except for the last pair of Rangana Herath (14) and Suranga Lakmal (15) there was not much resistance by Sri Lankan batsmen as they lost five wickets after tea too quickly.

Fielding at forward short leg, Rory Burns was hit on the back of his head when Niroshan Dickwella powerfully swept one onto him, but he was back on the field when play resumed after tea and opened batting in the second innings

England finished on 38 for no loss as they faced 12 overs in the second innings.

Batting coach Tilan Samaraweera blamed his batsmen for not coming up with a disciplined effort.

“There was nothing wrong with the pitch. No demons on it and our options were very poor. We didn’t bat well honestly. That’s the bottom line. It’s not a 200 pitch and it behaved really well. Five to six of our guys fell for soft dismissals. Not much technical but more mindset. We know England’s spinners bowled with defensive field settings and our options were a little bit wrong.”

Hundreds on debut against Sri Lanka

B. Stokes b Perera 7

J. Anderson not out 0

A. Mathews c Jennings b Ali 52

A. Dananjaya c Foakes b Ali 0