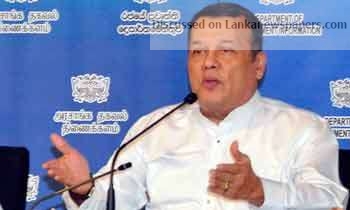 All members of the Cabinet of the Mahinda Rajapaksa Government would be sworn in before the opening ceremony of the new Parliamentary session on the 14th after prorogation, Cabinet Spokesman, Ports and Shipping Minister Mahinda Samarasinghe said today.

He said the Government would have to finish the job before the 14th to enable the Parliamentary staff to arrange new seating in the House and also to facilitate the smooth running of the Government.

Minister Samarasinghe added that Party leaders would likely to decide an early date, probably before November 20 to present the Vote on Account and to take up the UNF’s No-Confidence Motion against the new Government, he added.

Minister Samarasinghe said the Policy Statement of the new Government delivered by President Maithripala Sirisena would be the only Parliamentary business on the 14 after the opening ceremony of Parliament following the prorogation.

Addressing the weekly Cabinet news briefing yesterday both, Minister Samarasinghe and co-Cabinet Spokesman Mass Media and Digital Infrastructure State Minister Kheliya Rambukwella criticized the contents of a letter sent to public officials saying that he was still the Minister of Public Administration.

“Public officials must not take order from the Ministers appointed unconstitutionally,” he said.

“It was an illegal letter sent on the letterhead of the Public Administration Minister by an MP. He has no right to send an illegal letter to public officials requesting them not to obey orders coming from the top, under a power he does not have. Therefore, this letter has no authority. It was an attempted sabotage and officials must not take it seriously,” Minister Samarasinghe said.

State Minister Rambukwella said the President had the power under the Constitution to take over any Ministry and appoint Secretaries to Ministries and added that public servants were intelligent enough not to take illegal orders seriously.

“Even Speaker Karu Jayasuriya accepts this fact and that is why he has said that public officials must follow the Gazette notifications issued by the President,’ he noted.

“If the UNF had any issue regarding the appointment of Mahinda Rajapaksa as the Prime Minister or on the prorogation of Parliament, they must resolve it in the Supreme Court as done by lawyer Naganada Kodithuwakku, who had filed an FR case,” he said.