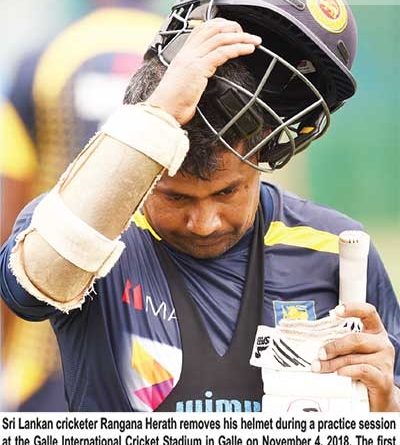 There was a slight distraction for Sri Lanka ahead of the three match Test series against England as fast bowler Lahiru Kumara was sent home on disciplinary grounds on the eve of the first Test here in Galle. Dushmantha Chameera was called up as replacement, but more of a concern for the Sri Lankans will be the weather in Galle.

Both teams were forced to train indoors as the entire ground was covered due to inclement weather. The hosts will be hoping that the weather clears in what will be Rangana Herath’s farewell Test. The veteran needs one more wicket to complete 100 wickets in Galle. Only two other players – James Anderson and Muttiah Muralitharan have claimed 100 wickets or more at a single venue.

There is an opportunity for Sri Lanka to move up to number three rank in Test cricket from their current position of six if they were able to secure a 3-0 whitewash. England are susceptible against quality spin and the hosts have named four spinners in the squad.

The Sri Lankan spinner dominated during the recent series against South Africa. England themselves, however, have a decent spin attack with both Moeen Ali, off-spin and Adil Rashid, leg-spin, expected to play. The tourists also have Jack Leach in the squad. The Somerset spinner was a key figure as they finished second in Division One of County Cricket this season.

England have not won a Test match overseas in more than two years with their last win coming against Bangladesh in Chittagong when they won by 22 runs. Since then they have played 13 Tests overseas and lost ten and drawn three. Five of those defeats have been by an innings.

The tourists will miss the services of their former skipper Alastair Cook, who retired from Test cricket at the end of the English summer this season. Of Cook’s 33 Test hundreds nine have been in Asia. He averaged 53 in Asia way above his career average of 45.

Surrey’s Ben Foakes is expected to make his Test debut as Jonny Bairstow, who twisted his ankle while playing football in Kandy during the ODI series has not recovered.