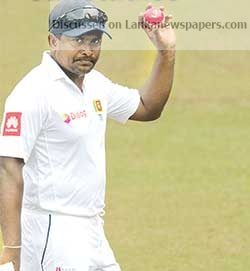 Veteran Rangana Herath will bring the curtains down on his excellent cricket career next week in Galle with Sri Lanka taking on England in the first match of the three game series. These are troubled times for Sri Lankan cricket with our stars involved in many an on and off the field controversies. At such a time, Herath gives us an opportunity to celebrate an outstanding career – a gentleman to the core and a perfect role model for the youngsters.

A lot of people might not know that Herath has been only once charged by the International Cricket Council for breach of players’ Code of Conduct. He was fined 25 percent of his match fee in Wellington during a Test match in 2015. His offense was not covering a sponsor’s logo in the strap of his helmet. Needless to say that Chris Broad was the Match Referee.

Herath actually was wearing a colleague’s helmet as his was being used by master batsman Kumar Sangakkara on his way to yet another double hundred.

Herath has one message to budding cricketers – do not neglect your studies.

Employed by Sampath Bank, the champion spinner wants to persevere in the banking field once he quits the game.

“My belief is that it helps when a player has job security. I have worked at three companies. I worked for Mr. Mathivanan at East West Marketing. Then I was with John Keels and joined Sampath Bank in 2000. When you are growing up and establishing yourself you need financial backing. For me, Sampath Bank has provided that. They have been extremely supportive of my cricket without asking any questions. That eases lot of burden and helps to concentrate on the sport. Whether I was part of the national team or dropped from the team or when I went overseas to play league cricket in England, the bank has always supported me. It is such security that allows you to play your cricket with freedom,” Herath told Sunday Island.

“For everyone there comes a stage where you have to finish your career. Then you need to have a job so you can make smooth transition rather than worrying about what am I going to do now. It is extremely important to get academically qualified and get settled in something other than cricket. So my advice for young cricketers is don’t neglect your studies.”

Exodus of the best talented or to put it simply brain drain is affecting cricket as well. Sri Lanka’s First Class cricket is hardly an attraction for elite players who fail to make it to the national team and what they tend to do is to travel either to Australia to play grade cricket or go to England to play league cricket. Some players even shuttle between England and Australia between the summers.

The departure of these top cricketers in mass scale is one reason for the standards of domestic cricket to go down. “That is a very vast subject and it need to be addressed in depth. You have to find out whether the players tend to move away due to financial issues they are facing. I believe that our First Class cricket has to improve. The structure has to improve and players need to be well looked after. Then First Class cricketers will give priority to domestic cricket.”

Herath is one of the rare breed, particularly when it comes to perseverance. He had completely gone off the radar a decade ago but continued without giving up hope. With Muttiah Muralitharan reaching the twilight of his career, there were other spinners like Ajantha Mendis, Suraj Randiv and Malinga Bandara to take over the mantle from him in 2009. Herath was already 30 plus and he was considered too old to be invested. Yet, he not only replaced Murali but will end as one of the top ten wicket takers in the world in Test cricket.

“Cricket builds the characters. All players need to have targets. There will be drawbacks no doubt, but you need to be focused. Don’t blame anyone. Work hard. Be honest and if you are honest you can improve,” concluded Herath.