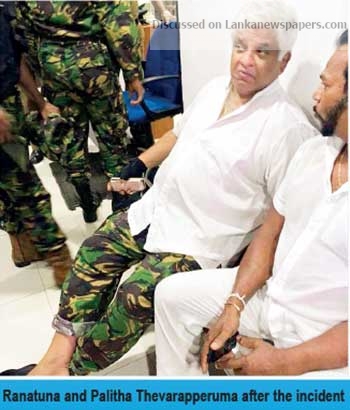 A 34-year-old man, who was shot yesterday by a security guard of former Minister of Petroleum Resources Development, Arjuna Ranatunga, had succumbed to his injuries last night, the Police Media Unit said. Two others injured in the incident are being treated at the National Hospital, Colombo.

A security guard opened fire on a crowd of protesters when Ranatunga visited the Ceylon Petroleum Corporation Head Office, Colombo-08.

The police Media Unit said: “Ranatunga went to the CPC office near the Dematagoda flyover while there was a protest. At that time shots were fired by a security guard of Ranatunga. Three people were wounded and rushed to the National Hospital. One person succumbed to his injuries. The security officer was arrested and Dematagoda police are conducting further investigations.”

The Media spokesman for the Trade Union Alliance of Petroleum Employees, Bandula Saman Kumara yesterday said that if the authorities did not to take Petroleum and Petroleum Resources Development Minister Arjuna Ranatunga into custody over yesterday’s incident, the distribution of fuel would be suspended today.

Meanwhile, addressing the media, last night Ranatunag said some people had tried to kill him when he visited the CPC head office.

On Saturday, the Presidential Secretariat notified all department heads, chairmen of the state corporations, statutory boards and state banks that the tenure of the ministers of the previous government had ended. A Presidential Secretariat team, accompanied by the police, sealed the Health Ministry following information that some unidentified persons were attempting to remove some files.