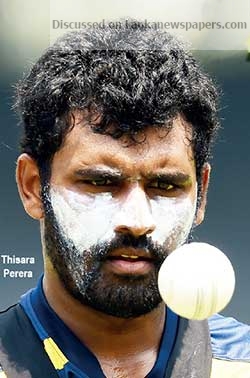 Sri Lanka’s T-20 skipper Thisara Perera admitted that dropped catches cost his team dearly in Saturday’s one off T-20 International against England at RPS. Sri Lanka failed to hold onto a couple of half-chances while Jason Roy was dropped thrice. The opening batsman went onto top score with 69 runs that came off 36 balls with four fours and six sixes.

Thanks to Roy’s heroics, England posted 187 for eight in 20 overs and Sri Lanka fell short by 30 runs. Perera, who top scored with 57 runs in 31 balls with one four and six sixes admitted sloppy fielding is to be blamed for his team’s defeat,.

“We dropped a few catches and that proved to be costly as those dropped chances were against the guy who top scored,” Perera said.

One of the positives for Sri Lanka was the promise young Kamindu Mendis showed. The 20-year-old who made his debut on Saturday bowled economically and was unlucky not to claim a wicket as Jason Roy on 47 was dropped off his bowling by Kusal Mendis. He also contributed with the bat making 24 off 14 balls.

“I was very impressed with Kamindu Mendis. Anyone who makes his debut will have some nerves but I didn’t see that in Kamindu when he batted or bowled. He has been in our radar. What the coaching staff told him was to be confident and not to put any additional pressure on him. I guess he was successful because he went about things with a positive mindset.”

“As captain I would urge him to play positive. If you change your style you are not going to go anywhere. I am talking from personal experience as that is what happened to me.”

England have now wrapped up the ODI and T-20 series and will engage in two warm-up games in Colombo before heading to Galle where the three match Test series gets underway next week.

Sri Lanka’s selectors have named the following squads for the two warm-up games against England.

First warm-up game at NCC on Tuesday and Wednesday:

Second warm-up game at CCC on Thursday and Friday: