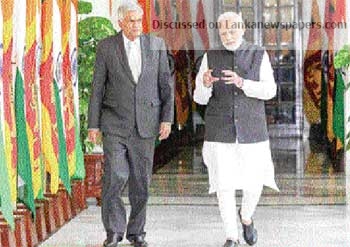 Prime Minister Ranil Wickremesinghe chats with Indian premier Narendra Modi during a meeting at Hyderabad House in New Delhi . Wickremesinghe was on a three-day official visit to the Indian capital.

It ought to be quite evident from the most recent controversies in Sri Lanka’s relations with India that the former is continuing to struggle to hit on an appropriate and sensible India policy. Indo-Sri Lanka ties have had their ups and downs over the decades but whether Sri Lanka has ever formulated and practised a far-seeing India policy since 1948 that would protect the legitimate interests of both countries is open to question. The proof of this is the recent discomfiture suffered by Sri Lanka over some completely unwarranted local comments alleging contemplated hostile action towards this country’s President by India’s Research and Analysis Wing.

The Sri Lankan government owes it to this country to lay bare the factual position in this latest controversy, considering its grave nature. What local investigations should come clean on is whether the Sri Lankan President ever accused RAW of attempting to assassinate him. If not, who is responsible for the canard? Needless to say, those responsible for this falsehood should be brought to justice, as the next step. Hopefully, the ‘air will be cleared’ on this unsettling development in this country’s ties with India before long.

There has been this huge drawback in Sri Lanka’s relations with India of Sri Lanka failing consistently to work in a friendly and constructive spirit with India. It is in this country’s best interests for it to be on the friendliest terms with India. This ought to be a cardinal core value in our India policy. It cannot be otherwise, because, in that case, Sri Lanka will be undermining her national interest.

Considering the highly destabilizing controversies that rock our relations with India every now and then, it ought to be clear that those sections that matter in Sri Lanka are yet to think through this country’s India policy comprehensively and clearly. That damaging rumours do originate in Sri Lanka concerning India in prominent local political circles is proof that important sections of this country’s polity are yet to place optimum value on this country maintaining trouble-free, cordial relations with India, in consideration of the pivotal importance of such ties to Sri Lanka’s national interest.

It is vitally important that local opinion do not in any way permit short term political interests to get in the way and damage this country’s relations with India. If this is continuing to happen, we have here conclusive evidence that thinking in depth on foreign policy issues is not among this country’s strong points. It seems as if talking and acting impulsively comes quite naturally to most local politicians and ‘opinion makers’. It ought to be clear that such proclivities are not in this country’s best interests.

The onus is on Sri Lanka to ensure that she is on the most cordial terms with India. This has to be a dominant strand of our regional policy in general and our India policy in particular. It cannot be otherwise because ‘getting along’ with India is a ‘must’ on account of Sri Lanka’s geographical location in particular. There is, obviously, nothing we could do about this hard reality that would never ‘go away’. It does not follow that Sri Lanka must be ‘subservient’ in any way to India but it is best that the closest neighbours get along on the friendliest of terms. One does not need to be a foreign policy expert to realize this. Common sense would suffice.

There was a time when security was a particularly sensitive issue in India-Sri Lanka relations. Security and defence continue to be principal factors in our ties with India but we have come a considerable distance from those times when the Panikkar Doctrine of Indian origin was a hotly debated topic in Indo-Lanka ties. That is, from that ‘discourse’ some years back when the idea that Sri Lanka comes within the Southern ‘defence perimeter’ of India was a particularly thorny issue. Sections in Sri Lanka were outraged by this notion then and it continues to be a revolting notion among some Southern ultra nationalist groups in Sri Lanka.

The international setting for the dominance of security and defence questions in Sri Lanka’s ties with India was the Cold War. But with the collapse of the Cold War, economics have tended to eclipse security and politics in our bilateral relations. And economics serve to stress the importance of Sri Lanka’s continued good relations with her closest neighbours, as never before.

Local Southern political circles in particular would do well to ponder on the ill consequences Sri Lanka would have to suffer if our current close economic and commercial ties with India are drastically undermined as a result of Indo-Lanka relations turning sour. They should realize that ‘not a shot would need to be fired’ on Sri Lanka if our relatively strong economic relations with India suffer setbacks on account of our politicians being unable to ‘guard their tongues’. A notable drop in our tourist traffic from India would suffice to drive home the point.

The need is great for Sri Lanka’s polity to look well beyond scoring ‘Brownie points’ in local political squabbles. Our considerably strong economic relations with India alone should convince local opinion that it is in Sri Lanka’s national interest to maintain and foster good relations with India. Cordial ties with India should be a principal and inviolable parameter of our India policy. Pragmatic economic considerations, if nothing else, dictate this policy line.

We would be touching on a sensitive issue by stating that there is a ‘primordial fear’ of India among some sections in Sri Lanka. This is most unfortunate and there is no better way to get over it other than by conducting cordial state-to-state relations coupled with increasingly better people-to-people ties. Bridge-building at all conceivable levels needs to be ongoing. And may there be more good will at the tip of Sri Lankan politicians’ tongues.