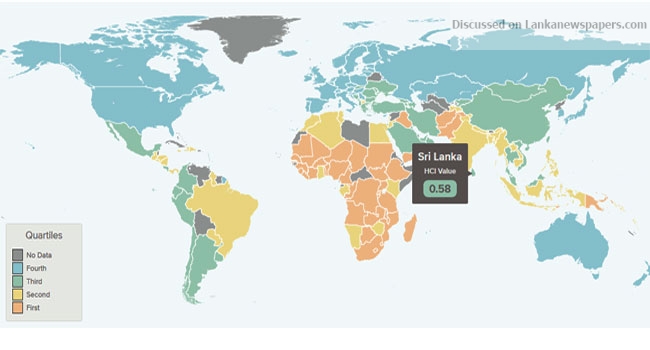 The World Bank Group unveiled a new system on Thursday to rank countries based on their success in developing human capital, an effort to prod governments to invest more effectively in education and healthcare.

Sri Lanka with an overall HCI value of 0.58 ranks ahead of its South Asian neighbors India, Pakistan and Bangladesh.

The rankings, based on health, education and survivability measures, assess the future productivity and earnings potential for citizens of 157 of the World Bank’s member nations, and ultimately those countries’ potential economic growth.

According to the Human Capital Index, a child born in Sri Lanka today will be 58 percent as productive when she grows up as she could be if she enjoyed complete education and full health. That compares with 44 percent in India and 39 percent in Pakistan. Bangladesh boasts 48 percent and Nepal 49 percent in the same category.

In the probability of survival, Sri Lanka surpasses its neighbours with 99 out of 100 children surviving to age 5, whereas it is 97 in Bangladesh, 96 in India and 93 in Pakistan.

In harmonised test scores, students in Sri Lanka score 400 – the highest in the region – on a scale where 625 represents advanced attainment and 300 represents minimum attainment. It is 369 in Nepal, 368 in Bangladesh and 355 in India, followed by Pakistan at 339.

In learning-adjusted Years of School, factoring in what children actually learn, expected years of school is only 8.3 years in Sri Lanka. That compares with 6.5 years in Bangladesh, 5.8 years in India and 4.8 years in Pakistan.

Across Sri Lanka, 87 percent of 15-year olds will survive until age 60. This statistic is a proxy for the range of fatal and non-fatal health outcomes that a child born today would experience as an adult under current conditions.

Bangladesh in on par with Sri Lanka in this indicator while across India, 83 percent of 15-year olds will survive until age 60. Compared to India, it is slightly higher in Pakistan — 84 percent. The rate is 85 percent in Nepal.

The report states that between 2012 and 2017, the HCI value for Sri Lanka remained approximately the same at 0.58. In 2017, Sri Lanka’s HCI is higher than the average for its region and income group.

The index was unveiled at the World Bank and International Monetary Fund annual meetings on the Indonesian island of Bali.

The index measures the mortality rate for children under five, early childhood stunting rates due to malnutrition and other factors, and health outcomes based on the proportion of 15-year-olds who survive until age 60.

It measures a country’s educational achievement based on the years of schooling a child can expect to obtain by age 18, combined with a country’s relative performance on international student achievement tests.

The index, irrespective of whether it is high or low, is not an indication of a country’s current policies or initiatives, but rather reflects where it has emerged over years and decades.

Put simply, the index measures what the productivity of a generation is, compared to what it could be, if they had benefitted from complete education and good health.

The index ranges from 0 to 1 and takes the highest value of 1 only if a child born today can expect to achieve full health (defined as no stunting and survival up to at least age 60) and complete her education potential (defined as 14 years of high-quality school by age 18).

The HCI measures the amount of human capital that a child born today can expect to attain by age 18. It conveys the productivity of the next generation of workers compared to a benchmark of complete education and full health. It is constructed for 157 countries.

It is made up of five indicators: the probability of survival to age five, a child’s expected years of schooling, harmonized test scores as a measure of quality of learning, adult survival rate (fraction of 15-year olds that will survive to age 60), and the proportion of children who are not stunted.