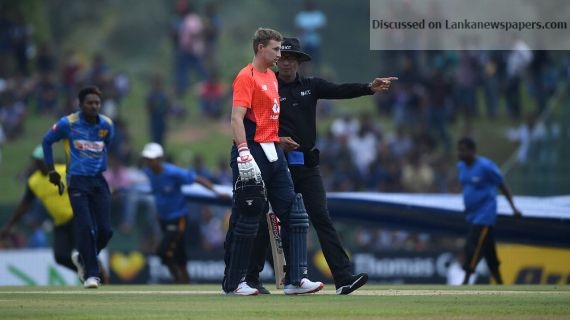 Sri Lanka’s monsoon season was the only winner in Dambulla as the first ODI was abandoned after just 15 overs of play. England had reached 92 for 2 after being asked to bat, but a heavy storm swept in and despite the entire playing surface being covered, the umpires eventually deemed a wet outfield unsuitable for a shortened game.

The groundstaff worked hard to mop up, with persistent rainfall having left several inches of standing water on the covers. However, after a delay of more than four-and-a-half hours, the captain shook hands on the decision to call things off.

“It was frustrating, especially as the umpires did call for the covers before the rain arrived, because when it rains here it rains for hours,” England captain, Eoin Morgan said. “They did their best in that regard. Unfortunately when they were taking the covers off there was some overflow, and so there were three or four areas of concern that were very muddy. I think when it gets to that stage, player safety is paramount.”

The abandonment meant Olly Stone‘s England debut amounted to little more than going through the warm-up and watching his team-mates bat. Stone was picked in the squad as cover for Liam Plunkett, whose wedding clashed with the first part of the tour, and he went straight into the side – but will now have to wait to make an impact.

Of Stone’s inclusion, Morgan said: “The thinking behind that was Olly offers something different. He bowls with a bit more pace than the guys we have currently. He’s a like-for-like replacement in the squad for Liam Plunkett. If Liam was here today he would have played the very same role. To change a game, if it’s not mystery spin in the middle overs, it’s with extra pace.”

After Sri Lanka had won the toss and chosen to bowl in the first ODI of five, newly instated captain Dinesh Chandimal said he was hoping for a “little bit of moisture in the wicket” to help his bowlers – but rather a lot of moisture was the eventual problem. Both teams will hope for better weather in Dambulla for the second game on Saturday.

Before the rain arrived, at around 3.40pm local time, England had made a steady start to their innings. The opening stand reached 49 at just over a run a ball when Jonny Bairstow got a thin edge behind off Nuwan Pradeep, and Jason Roy fell in the following over, skewing an ugly heave at Akila Dananjaya high towards mid-off.

The third-wicket pairing of Joe Root and Morgan did not take too much time over consolidating, pushing the score on to 92 for 2 at the drinks break, but with dark clouds beginning to hove into view, the groundstaff made their move.

England had been short of match practice in the lead-up to the series, with their first warm-up match affected by rain and bad light and the second washed out entirely. After a second consecutive abandonment, only the top four of Roy, Bairstow, Morgan and Root have had any competitive time in the middle.

“I remember coming here in 2014 a little bit later [during November-December], but I do remember the forecast being the same every day, and we managed to miss the rain last time,” Morgan said.

“It was quite competitive in the first 15 overs. The game was just starting to unfold. They took two wickets, and me and Root had just started to get something going, but I don’t think I could predict what would have happened from there.”