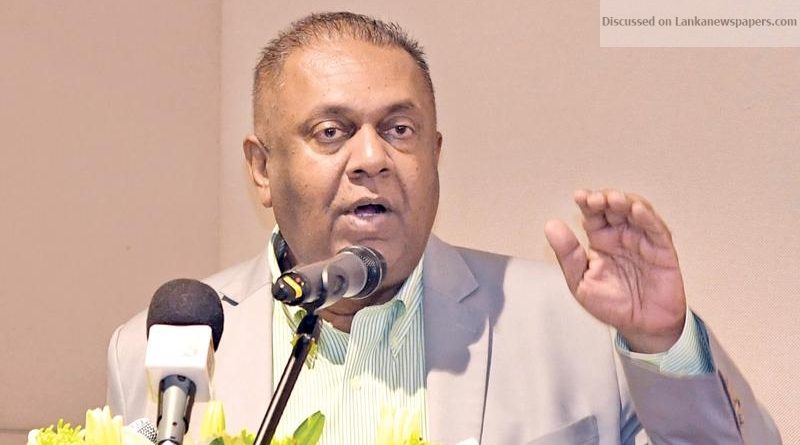 Sri Lanka’s Minister of Finance and Mass Media Mangala Samaraweera stresses that there will be no room for the country’s economy to collapse as some parties claim.

Speaking at a media briefing held at the United National Party headquarters Sirikotha, Minister Samaraweera said that the depreciation of rupee does not mean the collapse of country’s economy and the economy is strong.

The Minister further emphasized that the government, which not only inherited a collapsed state revenues and exports but also a declining economic growth rate, has confronted all the obstacles and is getting stronger.

He also stated that value of the rupee has fallen due to the huge debt crisis inherited from the previous Rajapakse regime.

“During the period Mahinda Rajapaksa, who speaks of the economy today, was Finance Minister, the rupee was devalued by 14% in three months. $ 4.1 billion was spent to avoid that. Exports were weakened during his time. Exports of 33% of GDP in 2000 declined to 14% in 2014,” he reminded.

“We have spent only US $ 250 million on this rupee crisis. The rupee has depreciated by only 10% compared to the US dollar. Sri Lanka has faced this global crisis much better than our neighbors, India and Pakistan,” Minister Samaraweera explained.

“We imposed restrictions in the face of the economic crisis,” he added.

“We have allocated the largest amount of money for the development of the village. At present, under the Gamperaliya program, 33,875 projects are underway. In every village, there are one or two development activities being carried out. For the 4 months until November, Rs. 20 billion has been allocated. In the 2019 budget, the next round of Gamperaliya will begin.”

Speaking further, the Minister said the Enterprise Sri Lanka Program has been launched to provide opportunities for local village entrepreneurs. By now, 26,978 new entrepreneurs have been granted loan facilities of Rs. 5.4 billion.

Responding to the opposition claims that people are burdened with taxes, the Finance Minister said in reality this government freed the people from tax burden.

“We were the ones who reduced the tax burden on the people. We freed Rs. 100,000 per month, or Rs. 1.2 million annual income, from income tax. Under the new Inland Revenue Act, we are trying to change the indirect to direct tax ratio. Now, there are 100,000 income tax files in our country,” the minister said.

The Minister said the country is expected to be able to maintain a 4% economic growth rate this year.