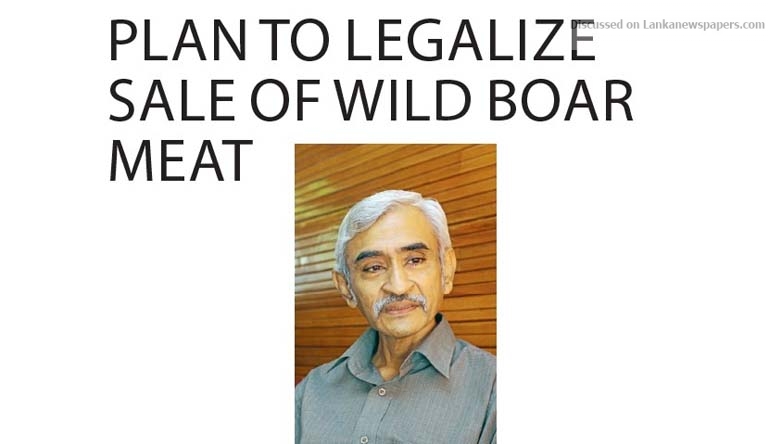 The Ministry of Agriculture intends to submit a Cabinet Paper within the coming week to legalize the sale of wild boar meat, Ministry officials said yesterday (20).
According to the Ministry, 30 per cent of the country’s annual agricultural harvest is lost due to wild animals and wild boar have become a menace causing crop destruction followed by monkeys, toque monkeys, wild elephants and peacocks.
Officials also added that while methods have been stepped up to protect agricultural crops from wild animals, such as electric fences, scarecrows and firecrackers, none of them have been effective, especially in the case of wild boar and the only option was to legalize the sale of wild boar meat.
Although the wild boar is listed under the ‘list of mammals and reptiles that are not protected’ under  the Fauna and Flora Protection Ordinance, according to the Department of Wildlife Conservation, the exhibition, sale, and distribution of wild boar meat is prohibited.
Meanwhile, speaking to Ceylon Today, Environmentalist Attorney-at-Law, Jagath Gunawardana said lifting the ban on the sale of wild boar meat would eventually threaten wild boar with extinction in the country, as there already remains a sizable market for wild boar meat, despite its sale being illegal.
“There are people who kill and sell wild boar meat discretely, and the only thing that’s preventing them from killing this animal in large numbers is the prohibition being put in place. If they lift the ban, wild boar will become an endangered species locally,”  he noted.
A similar situation arose with Spotted Deer and Sambhur in the 1970s, where the species became endangered, due to permits being given for hunting these deer varieties. While the Government later on listed the deer under the ‘protected’ category in 1993, the attempt proved futile, which led to the two deer varieties to be listed under the ‘strictly protected’ category in 2009, he added.
“Another problem is that natural predators of wild boar such as jackals have been wiped out by these people. According to farmers jackals steal chickens”, he added.
Gunawardana stressed that lifting the ban on wild boar meat to increase its killing was not an option, but rather a comprehensive study should be done to identify the cause.