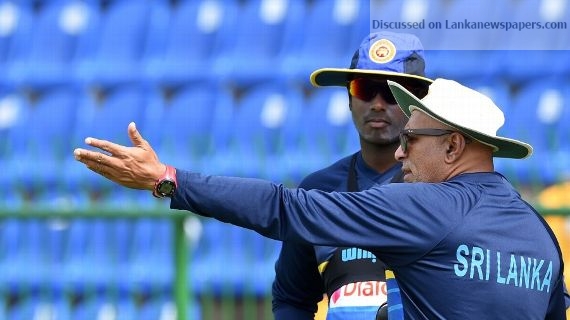 Right. Okay. This is pathetic, isn’t it? Knocked out of the Asia Cup basically before it has even begun. A big 91-run loss to Afghanistan, following an even bigger 137-run pasting by Bangladesh. Appalling. Someone needs to be held accountable for this garbage. How far Sri Lankan cricket has fallen. This is beyond embarrassing. Contracts must be torn up. Changes must be made. Heads surely have to roll.

And what better starting point than this Angelo Mathews? When have Sri Lanka ever done well when he was captain? Okay, so there were great bilateral series wins in England across formats in 2014. Also that historic Test series whitewash over Australia at home. And fine, there was an Asia Cup victory under him also. But, let’s see, apart from additional ODI series against South Africa, Pakistan, and Bangladesh, West Indies and Ireland, what has Mathews ever achieved as a leader?

Well, what do you mean Sri Lanka have already tried other one-day captains, and it went disastrously? You’re saying that within a space of 12 months, Upul Tharanga, Lasith Malinga, Chamara Kapugedara and Thisara Perera all took the reins in limited-overs cricket, and Sri Lanka were still consistently and emphatically thrashed on a selection of the planet’s continents? That Sri Lanka’s returns in the series Mathews didn’t captain in last year, were 18 losses and two wins?

Okay, fine. For the sake of argument, let’s leave Mathews aside then. What about coach Chandika Hathurusingha? He who descended back on the island at the start of the year, charging more than any coach ever has before, promising lasting change and a return to former glory. Of course he should be packed off, right? Surely a coach should know when his players are going out of form, and when he should switch them out for someone else? Just look at what has happened to Kusal Mendis’ one-day form – he’s gone 20 completed innings without a half-century now. Tharanga, Dhananjaya de Silva, Shehan Jayasuriya… these guys aren’t doing much better.

But I suppose you will make the point that Sri Lanka have already tried changing their coaches? Yes, of course I recall that last year Graham Ford was elbowed unceremoniously out of his job. And that after very few high-quality candidates applied for the job, the board practically had to go to Hathurusingha on their knees. Right, yes, there is also that insane statistic that Hathurusingha is Sri Lanka’s tenth head coach – including interim appointments – in the space of eight years. I guess the Asia Cup was also only his third ODI assignment, and that when Sri Lanka had actually won their first ODI trophy since 2016 earlier this year, it had been under Hathurusingha’s watch.

So, great, but if we are reserving judgement on him, what about these useless selectors? Wasn’t it Einstein who said that the definition of insanity was to keep persevering with too many bits-and-pieces allrounders and not enough capable specialists? Now, this is getting annoying. You are saying that even the selectors have been changed within the last 13 months, and that they have tried a new selection philosophy, based on giving players a long run in the side rather than changing personnel every game.

Right, look. I see where you are going with this. You are going to sound like a broken record in a minute. You are going to say something like: “Sure, Mathews and Hathurusingha have their flaws, but Sri Lanka will always be inconsistent as long as their domestic cricket is in such rotten shape.” You are going to drone on about how there is no point blaming the bakers, if you are giving them sawdust to make the cake.

You will claim the clubs have the cricket administration by the gonads, and that Sri Lanka’s domestic players play months and months of meaningless low-quality club cricket. That what Sri Lanka are reaping now is the result of years and years of profound mismanagement. That even though they have recently started playing these “Super Provincial” tournaments, they are still grossly insufficient – that playing six decent domestic one-dayers in a year is nowhere near enough to start closing the gap on the better one-day teams. And that when players are suddenly asked to make the galactic leap into international cricket, they have repeatedly shown a tendency to make bad on-field decisions, and then quickly get caught up in a vortex inadequacy, which translates into more bad decisions, and acute dips in form.

So just save it, no? We’ve all heard it before. You have been going on for years, and yet has there ever been any real political will to change Sri Lanka cricket? Any meaningful effort to take the game properly into the provinces? All there has always been is pettiness, politicking, and shameless slinging of mud; the same eight or so names that have run cricket since 1996, throwing punches at each other in a broken down carousel.

What point is there crying out for the actual lasting change?

So instead let’s argue again about sacking the captain and the coach.