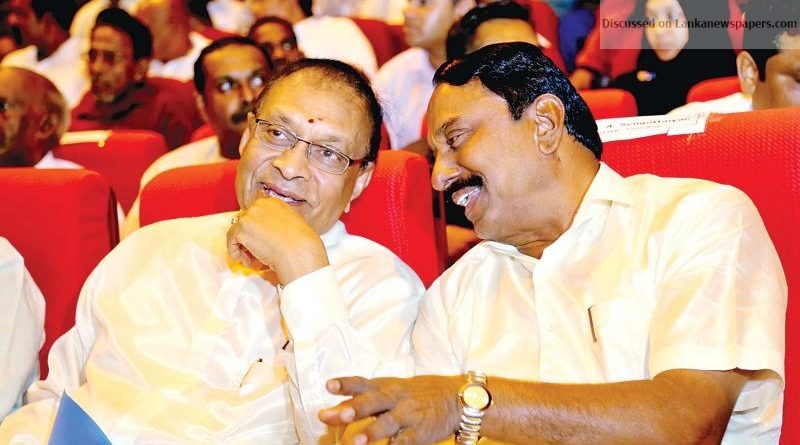 There are close relations between the Dravidas and the Sinhalese”, he said turning to Sengottaiyan seated on the impressive dais.

Kandy: For the first time in the past several decades, a high-level delegation from Sri Lanka is likely to visit Chennai soon “to carry the message of peace and collaboration” between the people of the island country and “the brethren” in Tamil Nadu.

Announcing this at the MGR centenary celebration at his birthplace Kandy on Sunday, Sri Lankan Parliament Speaker Karu Jayasuriya said it was a momentous occasion for the people of the two countries that Tamil Nadu education minister KA Sengottaiyan had brought a large team of experts from various fields, including education, healthcare, hospitality and industry, besides film personalities to relive the MGR saga on screen and in politics.

“Let us being a new chapter, a new era, from this visit of Sengottaiyan. It is a great gesture, a warm message you have brought. There are close relations between the Dravidas and the Sinhalese”, he said turning to Sengottaiyan seated on the impressive dais.

“There are no problems and differences between us that cannot be solved, including the fishermen issue that we realise is a basic livelihood issue. We must not politicise it but must look at it in humanitarian manner”, said the Speaker.

“I am saying this from my heart. I appeal to all political leaders, let us settle all our differences within our lifetime and leave nothing of that for the future generation”, said the Speaker, adding: “As an official delegation, we will go Tamil Nadu to convey this personally”.

“I told our President and Prime Minister that you all are here. They were so happy. We see this as a wonderful beginning of new possibities. The time has come to give up all our differences and work towards amity”, said Speaker Jayasuriya even as the audience of MGR fans, mostly Tamils of Kandy and neighbouring places, besides a sprinkle of the Sinahala top brass, burst into applause.
It seemed that the centenary celebrations for MGR–hailed by fans across the world as Puratchi Thalaivar, the revolutionary leader could well trigger a revolution of a different kind in turning out as a harbinger of hope for peace and collaboration between the Sinhalese and the Tamils, including those in Tamil Nadu.
“MGR is our product, our bhoomiputra. We gifted him to you”, said the Speaker, recalling the movie magic that the late Tamil star had spun over even the Sinhala youth in the earlier decades.