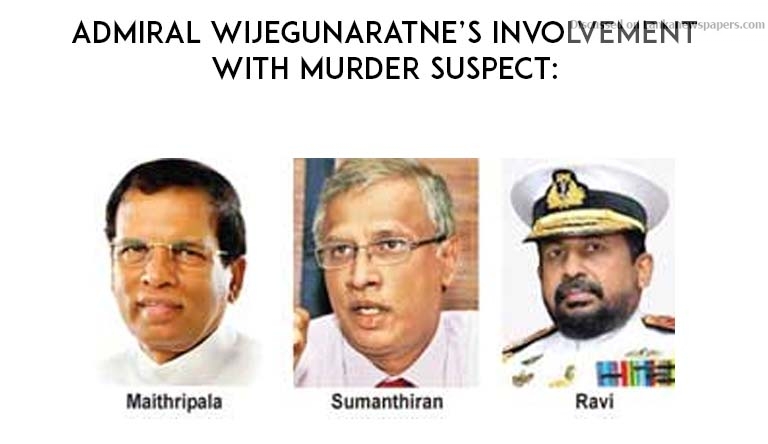 Continuing controversy over Chief of Defence Staff (CDS) Ravi Wijegunaratne, wanted by the Criminal Investigation Department (CID) in connection with allegedly aiding and abetting Lt. Commander Chandana Prasad Hettiarachchi, a suspect in two major wartime cases, leaving for Mexico on Sept. 10 has taken a dramatic turn with the Tamil National Alliance (TNA) demanding that the entire range of accountability issues here should be subjected to international judicial process.

Jaffna District MP and TNA spokesman M.A. Sumanthiran, PC, yesterday morning told The Island that President Maithripala Sirisena’s direct intervention in the matter left the TNA with no alternative but to call for international help. Sumanthiran emphasised that interference by ‘highest authorities in the country’ meant that the victims couldn’t expect justice through domestic judicial process.

The TNA has gone on the offensive ahead of President Sirisena’s address to the UNGA on Sept 25. Comprehensive international participation in local judicial process is allowed in accordance with Geneva Resolution co-sponsored by Sri Lanka in Oct 2015. In March 2017, Sri Lanka, while reiterating its commitment to the Oct 2015 Resolution, assured Geneva it would be fulfilled by March 2019.

Sumanthiran stressed that Lt. Commander Hettiarachchi, a suspect in the high profile assassination of TNA lawmaker and attorney-at-law Nadarajah Raviraj in Colombo on Nov 10, 2006, though being acquitted by the Colombo High Court on Dec 24, 2016 wasn’t a free man.

There were three matters-two appeals and one revision pending in the Court of Appeal in respect of Raviraj assassination, Sumanthiran said, adding that the Navy Officer went underground, while the caases were pending.

Sumanthiran said that in addition to the Raviraj’s killing, Lt. Commander Hettiarachchi was also wanted in connection with the abduction and disappearance of 11 Tamil youth during the period 2007-2008.

Referring to the officer’s recent arrest by the CID in the wake of accusations of him having fled the country with the help of Wijegunaratne, the President’s Counsel said that the highest ranking military official couldn’t have left for Mexico without President Sirisena’s knowledge. Sumanthiran asserted that President Sirisena couldn’t absolve himself of the responsibility for this situation.

Referring to recent media reports, particularly ‘Annidda’ reportage of the CDS matter, Sumanthiran said that President Sirisena had intervened on behalf of military officers implicated in accountability issues. The Jaffna District MP said that the TNA was gravely concerned about ‘highest authorities in the country’ interfering in local judicial process. In spite of repeated promises since the change of government in January 2015 that the judiciary and law enforcement authorities would be free to proceed with investigations, the CDS matter had proved beyond doubt political interference at the highest level.

Accountability allegations included the alleged massacre of 40,000 Tamil civilians and deliberate denial of food and medicine to those who had been trapped on the Vanni east front in 2009. The war was brought to a successful conclusion on May 19, 2009.

The TNA made its move in the wake of Ports and Shipping Minister and SLFP spokesman Mahinda Samarasinghe defending Admiral Wijegunaratne’s conduct. Samarasinghe dismissed allegations directed at the Admiral while insisting the CID could record a statement once he returned from Mexico. Quoting from a brief statement issued by the Office of the CDS, Samarasinghe said that the highest ranking serving officer was representing the country.

Admiral Wijegunaratne is expected to return on Sept 19.

Fort Magistrate Lanka Jayaratne on Aug 29 directed the CID to arrest Wijegunaratne if sufficient evidence was available of him facilitating Lt. Commander Hettiarachchi leaving the country. The CID has sought to question Wijegunaratne on the basis of a statement given by a Lieutenant Commander this year presently serving at the Navy headquarters.

On the basis of his statement, the CID accused Wijegunaratne of smuggling Hettiarachchi out in a Fast Attack Craft. Wijegunaratne denied the accusation.

The police initiated investigations into the alleged abduction and disappearances case in May 2009 following a complaint received from the then Navy Commander Vice Admiral Wasantha Karannagoda.

Among those initially arrested in connection with the investigation during the previous Rajapaksa administration was Lt. Commander Sampath Munasinghe, Personal Security Officer (PSO) of Karannagoda. Munasinghe received bail.

During decade long investigation, the CID recorded statements from nearly 60 Navy officers, including Karannagoda and Adm.Travis Sinniah, who commanded the Navy for one year after returning from retirement during current dispensation. One time Navy spokesman Commodore D.K.P. Dassanayake became the highest ranking Navy officer arrested in connection with the abduction and disappearance case. Dassanayake, too, received bail this year.

Meanwhile, well informed sources told The Island that trouble erupted this week after President Sirisena summoned senior officers of the Attorney General’s Department, the police and two ministers to discuss the CID move to question and arrest Wijegunaratne.

Sources said that President Sirisena had expressed displeasure over the way the CID was handling the case, while the Attorney General’s Department suggested ways and means of overcoming the problem.

One thought on “Admiral Wijegunaratne’s involvement with murder suspect:”