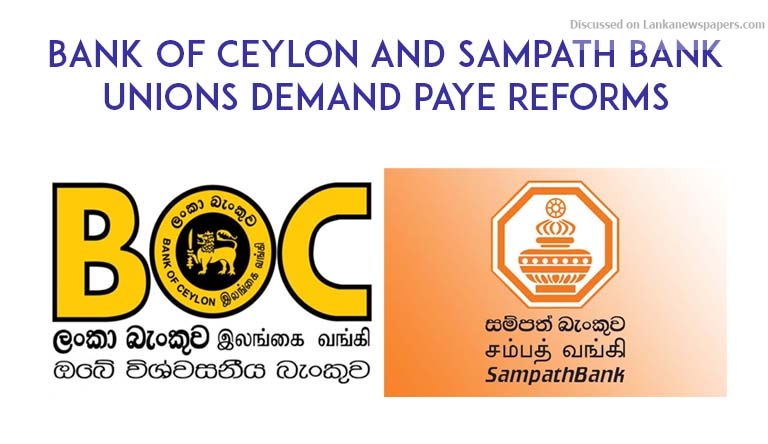 The Ceylon Bank Employees Union (CBEU) called on the Government yesterday to make reforms in the Pay As You Earn (PAYE) tax, so that it does not impose restrictions on employee benefits.

The new tax bill, which came into effect from 1 April 2018, counts employee benefits as income, and is therefore accounted for the PAYE tax. Unions also claimed the Government has also taken measures to categorise the interest rate difference between the concessionary rates offered to bank employees and market rates as an income, and tax that amount.

The CBEU, together with the Sampath Bank Employee Union (SBEU), urged the Finance Minister to implement their proposals. They also said that if no action is taken, they will be forced to commence an island-wide strike.

“We are not imposing on the Government, but we are urging them to consider these reforms. These are the people of the working class that have been targeted. We do not appreciate the imposing of taxes on employee benefits. The previous Government attempted similar reforms, but after negotiations with concerned parties, the reforms were dropped,” CBEU President Channa Dissanayake said.

The CBEU and SBEU stated that, though they have been given relief with the extension of the tax free limitations from Rs. 62,500 to Rs. 100,000, it is not beneficial enough to employees, as employee benefits has been taken into account as income, and the PAYE tax is being imposed on that.

“The job as a banker is attractive because of these employee benefits. Imposing taxes on these benefits is not an acceptable reform. We are not saying we do not want to pay taxes. What we’re saying is that these new tax reforms cannot be imposed on employee benefits. They no longer will be employee benefits, and our employees will take home a lower salary than they do if these tax reforms take effect,” SBEU President Ashoka Manikgoda said.