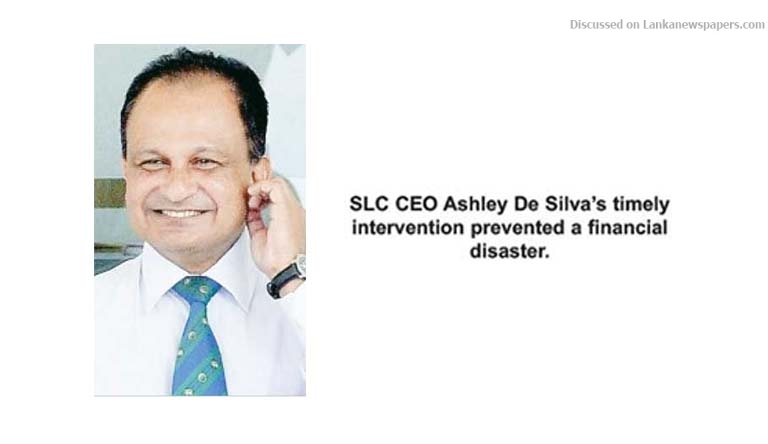 Sri Lanka Cricket’s Chief Financial Officer has informed investigators looking into one of the biggest financial scandals in the country that his e-mail had been hacked. Last Friday, Sony Television who own the television rights for the upcoming bilateral series against England, informed SLC about a suspicious move to redirect finances the company owed to SLC to an offshore account.

The Chief Financial Officer on either the 3rd or 4th September had e-mailed Sony Television asking them to transfer US$ 5.5 million to the offshore account. The correspondence between the Chief Financial Officer and Sony had been on for several weeks until the request to transfer funds in early September and Sony had no reason to doubt the process as the e-mails had been copied to both CEO Ashley de Silva and Chief Operating Officer Jerome Jayaratne.

However, there was a major glitch. Although De Silva’s e-mail id is ceo@srilankacrikcet.lk, the mail had been copied to a false address ceo@srilankacricket.us  The same formula had been used with the e-mail copied of Jayaratne with ‘us’ replacing ‘lk’. No one detected foul play until a telephone call from Sony to CEO of SLC.

Since the account was not one that was provided by SLC at the moment the contract between the parties was signed, Sony had asked CEO Ashley De Silva as to whether they could go ahead and make the payment.

SLC’s Finance Department was sealed on Monday as investigators decided to carry out an audit for the last 12 months.

An insider told The Island that SLC didn’t buy into the story that the e-mail had been hacked. “We find it difficult to believe that one particular e-mail has been hacked. However, this kind of investigation is beyond our means and I am sure the truth will come out the moment FCID finish investigations,” a prominent official of SLC told The Island.

The official also denied that the Chief Financial Officer, who had been sent on compulsory leave, had links with former President of SLC Thilanga Sumathipala having worked for him previously.

The spotlight, however, will turn on members of SLC’s former Executive Committee who decided not to renew the contract of former Head of Finance Chandramali Korale. Known as an efficient and honest employee, Ms. Korale may have ruffled a few feathers when she didn’t dance to whims and fancies of certain members of the former Executive Committee. They wanted a change and it has been a disastrous one. Among those who endorsed the new recruit were prominent figures including Nuzki Mohammad and Shammi Silva.

The CEO of the board has come in for immense praise for averting a major financial scandal and the whole episode gives us a reminder that there requires tighter controls in managing the finances of SLC.

It must be mentioned here that in 2009 the then Sports Minister sold the television rights to a blacklisted company without proper verification and SLC suffered a loss to the tune of US$ 10 million after the company defaulted payments. Successive governments have failed to investigate one of the biggest financial scandals in the country.