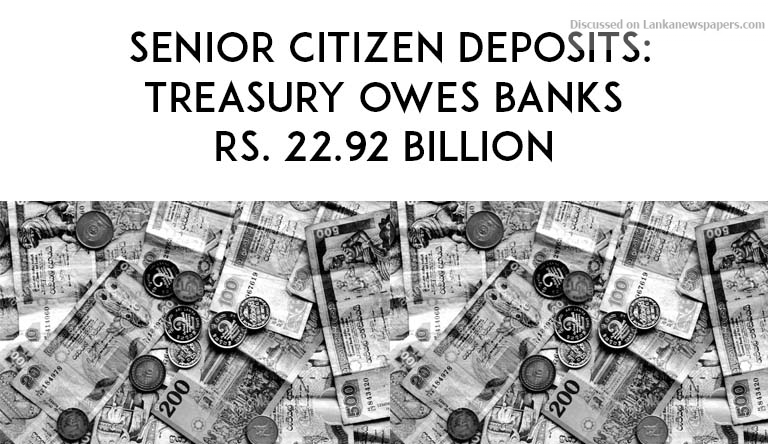 The Treasury owes commercial banks more than Rs 22.92 billion in reimbursement for higher interest rates paid on senior citizens fixed deposits on Government instructions, data gathered under the Right to Information Act show. The Government through its 2015 budget mandated commercial banks to grant a special interest rate of 15 percent for senior citizens’ fixed deposits up to Rs 1 million. In 2017, the Finance Ministry increased the upper limit of the fixed deposit to Rs 1.5 million but the interest rate remained at 15 percent.

The Treasury was to pay the difference between the special interest rate and the market standard interest rate offered by commercial banks. However, the last payment made to the banks was in 2016. Since then, arrears have run up but no reimbursement was made. For instance, a total of Rs 13.462 billion was owed to banks in 2017 but none of it was paid, data from the Ministry of Information show. In the first quarter of this year, Rs 3.304 billion was owed. This, too, was not settled.

In 2016, only a part reimbursement was done–out of the Rs 14.518 billion owed by the Treasury, a total of Rs 6.156 billion was paid. Only in 2015, the first year of the scheme, was the full amount of Rs 3.361 billion settled. Up to now, however, the Treasury has paid Rs 11.723 billion to banks out of the Rs 34.646 billion owed in total since 2015. The number of senior citizen fixed deposits ballooned after the introduction of the scheme.

In 2016, it was reported that the Central Bank’s Bank Supervision Department had issued a letter stating that the Treasury was delaying the rebate as financial institutions had calculated claims on the basis of very low interest rates prevailing at the beginning of 2015. It said the rebate must be calculated by banks and forwarded to the regulator during each quarter.

Since then, however, there has been no resolution to the issue. Instead, the Finance Ministry has introduced further schemes that operate on a similar principle. Under the recently launched Enterprise Sri Lanka loans, the Government has undertaken to subsidise between 25 and 75 percent of interest rates granted on a range of products.
For instance, a new ‘Riya Shakthi’ loan of up to Rs 4 million for school van owners to buy a new 32-seat bus carries with it an annual interest rate of 13.5 percent of which the borrower will pay just 3.38 percent while the Government will subsidise 75 percent of it. The same applies to the ‘Govi Navoda’ scheme for small-scale farmers and farmer organisations to mechanise cultivation.