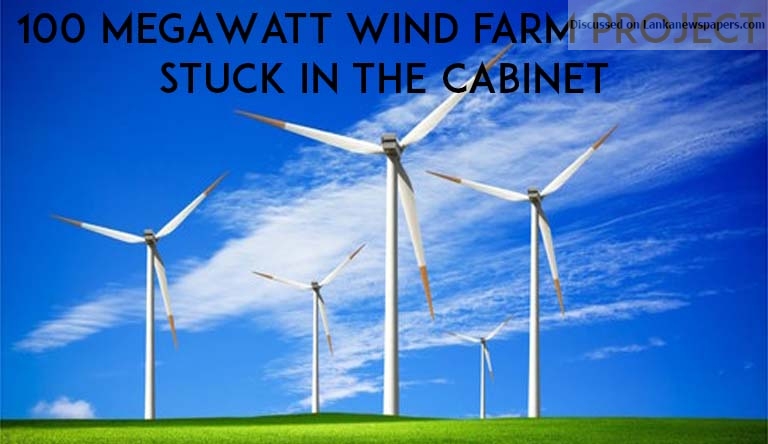 Danish wind turbine manufacturer has won a tender to build the 100 MegaWatt wind farm in Mannar but the project is held up by delays at Cabinet level.
The Ceylon Electricity Board Engineers’ Union (CEBEU) has now urged Cabinet to speed up approval of the US$ 140 million (Rs 22,68 billion) project which Vestas Asia Pacific A/S, Denmark, secured, following evaluation of international competitive bids. The venture is expected to be completed by May 2020.

Approval of the Standing Cabinet Appointed Procurement Committee (SCAPC) and the Asian Development Bank, which is providing funds under a concessionary loan, has already been approved, but Cabinet approval is still pending. Electricity from this project can be generated at less than US 5 cents per kilowatt hour (kWh). This is just below Rs 8 per kWh at prevailing exchange rates, CEBEU Committee Member Athula Wanniarachchi said.

Construction of Wind Farm would be greatly influenced by climate conditions in Mannar, Mr Wanniarachchi warned. Therefore, timely awarding of the contract is crucial, to complete the project by the May 2020 deadline, as wind turbines need to be hoisted prior to the onset of the South-West monsoon. “If there is a considerable delay in commencing project activities, they may end up having to hoist up the turbines during strong monsoonal winds, which may not be feasible,” he observed.

In such a scenario, the CEB estimates that, completion of the project may have to be pushed back to the first quarter of 2021. This would mean the plant would lose out on generating 280 million kWh of electricity, from a South-West monsoonal season. The CEBEU has urged the Cabinet to approve the project, so that, the contract can be awarded by next month.