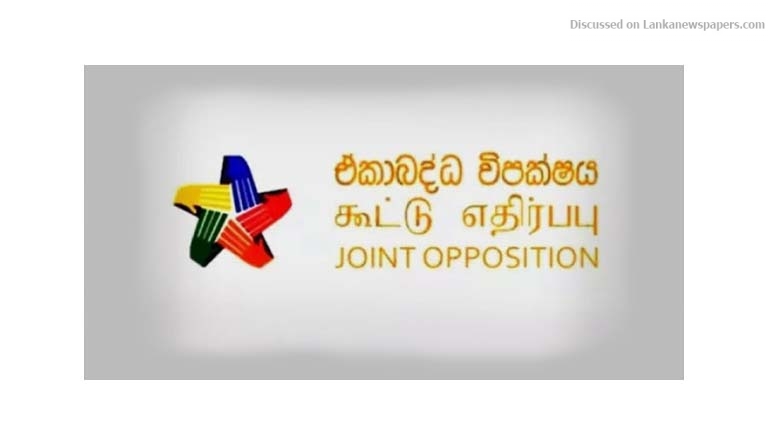 Claiming the ‘Janabalaya Kolombata’ protest was a success, the Sri Lanka Podujana Peramuna (SLPP) plan on replicating similar rallies in each district in the coming months.

Joint Opposition (JO) MP Mahindananda Aluthgamage yesterday told the Daily FT that they were planning on organising a similar rally in Kandy soon.

“The Colombo rally was a great success. Our next location will be Kandy and we will have a rally even larger than Janabalaya Kolombata.”

Rejecting allegations made by the Government to the effect that the Joint Opposition had claimed to topple the Government through the protest march this week, Aluthgamage said that the rally was targeting upcoming Provincial Council elections.

“The UNP is alleging that we had claimed we would topple the Government with this rally, but no one can topple a government with a single protest. We are targeting the Provincial Council elections. We had a rally in Kandy just before the Local Government elections and as a result, we achieved a resounding victory at the Local Government polls. Similarly, we will be holding several rallies aiming for the Provincial Council elections and the next Presidential election,”

With regard to the Sri Lanka Freedom Party (SLFP) MPs who are in the JO and their party allegiances, MP Aluthgamage said that they had not taken any decision on whether to revoke their SLFP membership or not.

“We have got the SLFP group of 16 to work on having the SLFP leave the Unity Government. We are all SLFP-ers and we love our party, but we cannot accept an alliance with the UNP. The policies of the two parties are of stark difference. That is why we are not in the Government. We are waiting to see if the SLFP would leave the Government. Till then we will not take a decision regarding our Party membership,” he said.

Minister of Southern Development and Chief of Staff to the Prime Minister Sagala Ratnayake yesterday issued the following statement on Wednesday’s protest by the Joint Opposition.

This, needless to say, is a major concern for the Rajapaksa cabal as they know the wheels of justice are moving. Their collective conscience is aware that they cannot play hike-and-seek with law enforcement anymore.

Their last resort was a massive protest campaign to show the world that they were being hunted down for political reasons. It was in this context that the ‘Janabalaya’ campaign was planned by a group affiliated with Parliamentarian Namal Rajapaksa.

However, little did they realise that they were too late for this sort of theatre. The public is familiar with their theatrics and cannot be hoodwinked anymore. It is now clear that the Rajapaksas have only hoodwinked themselves with these disastrous tactics.

Despite their claims of toppling the Government, some of their supporters were seen stranded in the city, unable to go back home after the protest. It was also revealed that 81 drunk protesters, who were ‘knocked out’ on the street, were picked up by the ‘Suwaseriya’ Ambulance service and admitted to hospital. When all this unfolded, the leaders of the Joint Opposition were wining and dining in their plush suites in some leading hotels, not too far from the Lake House Roundabout.

None of them were apologetic about the great inconvenience they caused office workers trying to go back to their loved ones after a long day of work. They were the ones who were relentlessly exploited by a family rule for nearly a decade. In a way, it is naive to expect them to be considerate about the common public when they do not want to look into the needs of those who marched to Colombo in support of their political campaign.

The biggest outcome of the Janabalaya campaign, in my view, is that it unmasked the top echelons of the Joint Opposition and exposed their real faces to the public. At the same, it reminded the Rajapaksa cabal that ‘street protests’ or other forms of theatrics cannot save them from the long arm of the law.