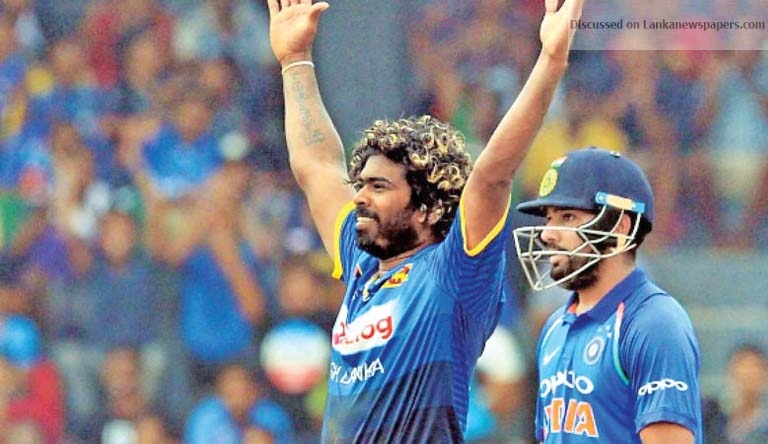 Cricket selections in this country are becoming bizarre by the day. Not so long ago the chairman of selectors Graeme Labrooy had gone on record stating that fast bowler Lasith Malinga was not in his plans for the 2019 World Cup in England.

In the IPL this year Sri Lanka Cricket even issued him a NOC (No Objection Certificate) for him to play the role of bowling mentor to the Mumbai Indians team which in other words meant that his career as an international player was as good as over.

But one year down the road we see Malinga being drafted into the Sri Lanka squad of 16 for the upcoming Asia Cup fifty-over tournament in the UAE.

The question that needs to be asked is, has the line of thinking changed due to misguided form of opinion or are the impediments to selecting him have now been removed. It is clear as day that Malinga was sidelined not due to cricketing reasons but on the instructions of the former Sports Minister and former Sri Lanka Cricket president with whom he had verbal spats.

Malinga’s track record in the past one or 1½ years may show that he has taken only very few wickets but if you take the number of catches that has been missed off his bowling it will count to around 15 wickets. You cannot penalize the poor bowler if the fielding is not up to standard.

In the first place Malinga should never have been dropped because in international cricket he is still the best fast bowler we have. In a 50-over game the second power play depends on the result of a game. Unless you have attacking wicket-taking bowlers with the ability to contain you are going to lose the plot. A player like Malinga does not have to prove his ability in local tournaments even if he has three wickets in a T20 tournament, for it proves nothing.

Then there is the question of why four off-spinners have been picked including two specialist off-spinners in the form of Akila Dananjaya and Dilruwan Perera when we also have Dhananjaya de Silva and Danushka Gunathilaka who also bowl off-spin. What is the compulsion to take four off spinners when we are playing possibly against teams that are best at playing spin – India, Pakistan, Bangladesh and Afghanistan on very good batting tracks in Dubai and Abu Dhabi where they are not going to get any turn on the surface.

From nowhere Amila Aponso is brought back into the team two years after he had been identified as the potential replacement for Rangana Herath. The lack of a right-arm leg-spinner is really going to expose the bowling unit against right-handers. Unless you back youth in a one-day 50-over and shorter format T20 our fielding standards are going to drop and we are going to be giving at least 50 runs on the field which will affect our performances. The dropping of Niroshan Dickwella is a case in point. Angelo Mathews, Suranga Lakmal, Upul Tharanga and Malinga are all in their mid thirties. Are we going to be sharp on the field as the modern game expects you to be?

Sri Lanka should take a clear example the approach South Africa took on their tour here recently narrowing down their side for the World Cup. They left their main strike bowlers Imran Thahir and Chris Morris – both IPL standard players at home and came to Sri Lanka. It was quite obvious that they were trying to see how capable their younger bowlers were. That is the way to develop the team. It is not going for short term and ad hoc shortsighted wins.

What is happening now is that the selectors are taking a piecemeal approach just to keep the public happy. There is a lot of resentment from the public and the cricket fans at large today where it has come to a level that people are not even watching cricket.

Without having a clear plan to identify our best 15 for the World Cup, we are gambling with decisions hoping that it will work out. You can’t do that. You can’t fiddle with the interest of a nation.