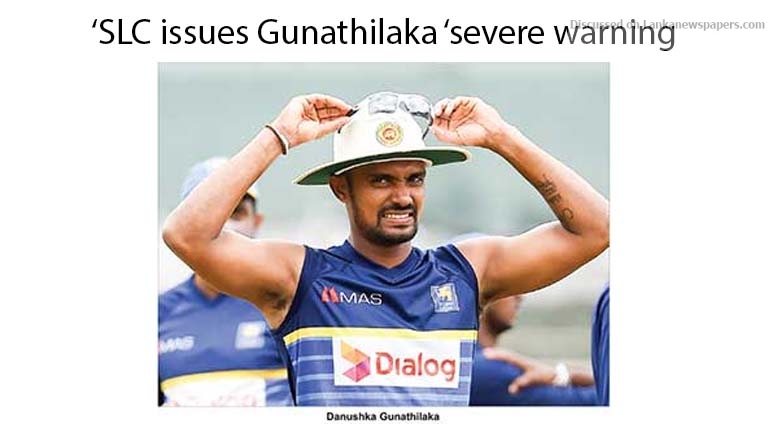 Sri Lanka Cricket has asked opening batsman Danushka Gunathilaka to pull up his socks following his repeated off the field troubles. The 27-year-old was fined and handed a six match suspension that saw him miss the entire limited overs leg of the recent bilateral series against South Africa for breaching team curfew.

The Sri Lankan team will assemble at RPS tomorrow to resume training ahead of the Asia Cup tournament. Gunathilaka has been drafted into the 16 member squad, but SLC has informed him that any further demeanour will be dealt with severely.

“He has been given a severe warning. We are disappointed with his conduct. He has paid the price for what he has done. We believe that he has learned a lesson and hope that these things will not be repeated,” a Sri Lanka Cricket official told The Island.

Earlier, captain Angelo Mathews and Head Coach Chandika Hathurusingha too had expressed their disappointment after Gunathilaka turned up in his hotel room at 2am on the third day of the second Test match against South Africa at SSC.

In August last year, Gunathilaka was sent home during the bilateral series against India when he turned up for training drunk and without his kit bag. He was handed a suspension on that instance as well and the left-handed batsman missed a part of Sri Lanka’s tour to UAE for the series against Pakistan.

Gunathilaka was in good nick before he got into trouble having posted twin fifties in the SSC Test match that Sri Lanka won to clinch the two match series 2-0.

He was part of the Dambulla squad for the recent SLC T-20 League and hit two half-centuries.

Former captain Sanath Jayasuriya recently named Gunathilaka as one of the players who could break his Sri Lankan record for most ODI centuries – 28.

Sri Lanka will leave for UAE next week for the six nation Asia Cup tournament and will take on Bangladesh in the curtain-raiser in Dubai on the 15th September. Afghanistan is the other team in Group ‘A’. India, Pakistan and one of the teams from the ongoing qualifying tournament will form Group ‘B’.