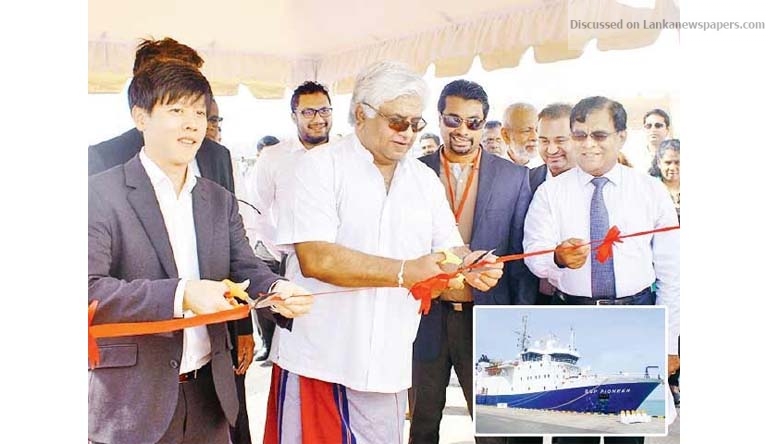 The Chinese-based Seismic Vessel BGP Pioneer has arrived at Colombo Port to conduct a Modern Broadband 2D seismic survey for hydrocarbon exploration in the country. The inauguration ceremony to commence the operations was held yesterday, with the patronage of the Minister of Petroleum Resources Development Arjuna Ranatunga.
The company plans to conclude the Survey within three months.
Speaking at the event the Minister said that depending on the findings of this survey, the Sri Lankan Government planning to enter into a Production Sharing Agreement with the Total S.A., a French multinational integrated oil and gas company for the interested areas after further negotiations.
The seismic survey, carried out by Eastern Echo DMCC which is a fully-owned subsidiary of Schlumberger, will be the largest ever 2D seismic survey conducted in Sri Lanka, acquiring more than 5000 Line km of data in an area of more than 100,000 km2.
The survey would cover the ultra-deep water blocks JS5 and JS6 in the eastern offshore areas of the country, where the Government of Sri Lanka has a joint study agreement with the French Oil and Gas Super Major Total.
In parallel to the seismic data acquisition, the ship will also obtain Gravity and Magnetic data. These data will then be sent to the Schlumberger office in Kuala Lumpur, Malaysia for processing, followed by a detailed interpretation jointly done by geoscientist from the Petroleum Resources Development Secretariat (PRDS) and Total to identify potential areas for hydrocarbon accumulations.

If successful, Total will enter into a Production Sharing Agreement with the government of Sri Lanka for the interested areas after further negotiations.
Though the total cost of this project will be around USD nine million, the Government of Sri Lanka, will not have to bear any of it, since this will be conducted according to a multi-client business model. Sri Lanka will further benefit from this survey by receiving data for its national data repository, knowledge transfer and promotion of local goods and services.