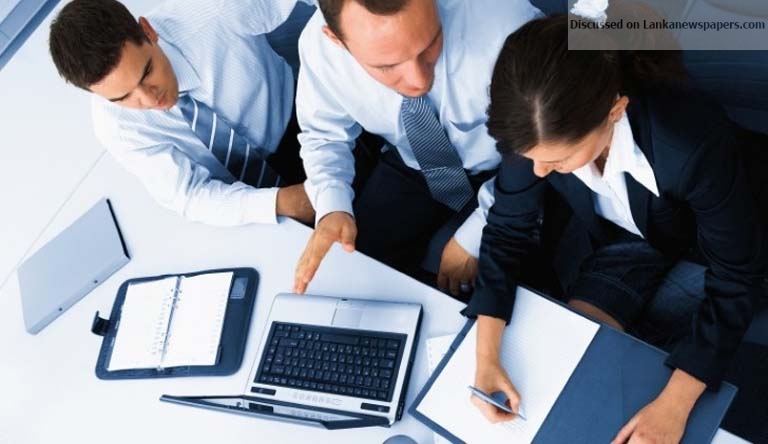 The Information and Communication Technology (ICT) and the ICT Enabled Services Industries have a shortfall of 40,000 skilled workers, Chairman of the Federation of Information Technology Industry Sri Lanka, Dr. Kithsiri Manchanayake said yesterday (27).
The two industries currently employ 80,000 having had generated a total income of US$ 1.2 billion last year to be Sri Lanka’s sixth largest debt-free foreign exchange (FX) earner.
Project Manager of the State-owned ICT Agency, Sachindra Samararatne speaking at this occasion said that to meet this demand, State-owned National Institute of Business Management set-up the National School of Business Management in Homagama two years ago in a public-private partnership (PPP) with foreign degree awarding universities with an undergraduate seating capacity of 9,000, a potential to pass out 3,000 ICT graduates annually, with the first passing out ceremony due in another two years’ time.
The uniqueness of an ICT degree is that the English language plays a secondary role. What is of predominant importance is to have the required skills set. “Even a General Certificate of Education Ordinary Level examination passed out student, if he/she has the requisite skills set can become an ICT professional,” said Dr. Manchanayake.
The Government’s export strategy benchmarking 2022 encourages such PPPs in the ICT sector and has plans to increase employment numbers in the ICT sector to 200,000 and exports to $ five billion by that year.
Export Development Board (EDB) Chairperson Indira Malwatte, also speaking at the occasion,  said that the Government’s interest free enterprise loan scheme called Arabuma had attracted 400 applications so far. She said that the EDB hopes to pass at least 25 of such applications by the year end. The Government plans to have 1,000 industry start-ups on board in the near future. No documents other than a business idea are required from the applicant under this scheme, she said. The beneficiary will be entitled to a loan of a maximum value of Rs 1.5 million of a five-year tenure where the providers will be the two State commercial banks, she said. No collateral will be required to benefit from this loan, only a bankable business proposition, said Malwatte. Most of the applications were not from the Western Province, EDB’s Export Service Director M.K.S.K. Maldeni who was also present at this event said.
Meanwhile, the ICT industry together with the EDB will launch a two day programme in Matara next month with the two fold objectives of building entrepreneurs with a bent on ICT and also making ICT as a means of employment, considering the deficit in employment the industry faces.
Sri Lanka Association of Software Services and Companies Chairman Jeewan Gnanam speaking at the occasion said that a mentoring programme at the Colombo University was launched recently to wean undergraduates in the sciences for employment in the ICT sector.
A graduate with a first class degree from the University of Moratuwa can earn a starting salary of between Rs 100,000-120,000 per mensem, General Manager of SimCentric Technologies, an indigenous software exporting firm, Haridhu Abeygooneratne told Ceylon Today. A graduate with a pass can start off at Rs 40,000. He said that SimCentric makes an annual revenue of between United States dollars five million to six million, by making exports to the United State of America, Europe, Australia, New Zealand, Singapore, Thailand and Malaysia.