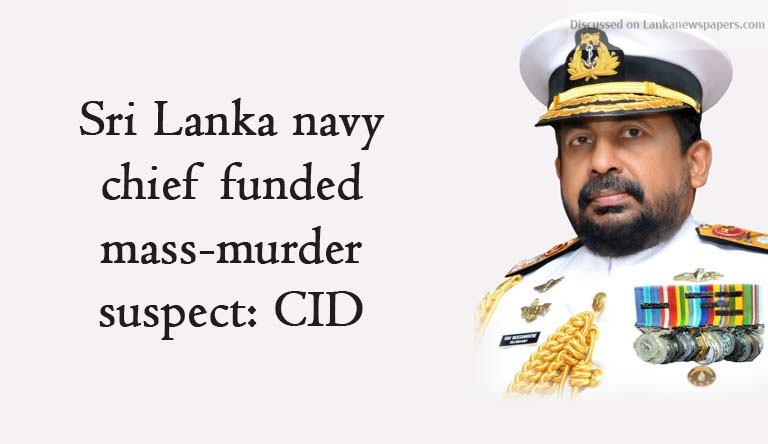 Sri Lanka’s chief of defence staff  Admiral Ravindra Wijegunaratne gave half a million rupees in cash to help the main suspect in the abduction and murder of 11 children escape arrest, the Colombo magistrate was told Wednesday.

Colombo Fort Chief Magistrate Lanka Jayaratne ordered the bank of Ceylon to provide details of a navy account from which 500,000 rupees had been given to Hettiarachchi Mudiyanselage Chandana Prasad Hettiarachchi alias Navy Sampath last year to escape the police net.

“There is incriminating evidence against Admiral Wijegunaratne’s role (when he was navy commander) in allowing  the accused to evade arrest,” the police Criminal Investigations Department (CID) told the magistrate.

She ordered the bank to release details of transactions of the account between March and May last year.  At the time of his arrest, had in his possession several fake identity cards, including one which he is believed to have used to obtain a passport.

The magistrate granted permission to further interrogate the suspect on his connections and those who helped him to briefly flee the country. He was remanded in custody till August 29.

In the meantime, Wijegunaratne who is currently the senior most military officer in the country faces imminent arrest on charges of aiding and abetting a murder suspect as well as destroying evidence.

On a previous court hearing, the magistrate had told the CID that there was no impediment for them to arrest any individual, however highly placed they may be.

The CID has uncovered chilling details of how children and young men of wealthy families were abducted for ransom by a gang of navy officers, allegedly led by Hettiarachchi, and subsequently killed after holding them at naval facilities in Colombo and Trincomalee between 2008 and 2009.

The alarm was raised by the then navy commander , Admiral Wasantha Karannagoda who complained to the CID  during the former regime of president Mahinda Rajapaksa.  However, the case has dragged with powerful political interests protecting the suspects, police said.

Police said the current navy chief was not implicated in the abductions or the murders, but he was accused of shielding the suspects and providing them cash and protection.

Several other navy intelligence officers, including former navy spokesman D. K. P. Dassanayake who were arrested in connection with the murders have now been released on bail.

Admiral Wijegunaratne was caught on camera in December 2016 assaulting a television journalist at the Hambantota harbour, but despite a huge public outcry, President Maithripala Sirisena granted him an extension of service and later promoted him CDS.

His successor Travis Sinniah took office in August last year pledging no forgiveness for his officers who may have committed crimes taking the cover of the island’s drawn out separatist war. But Sinniah, regarded as one of the most honourable officers in service, was terminated in just two months after he was denied an extension of service.