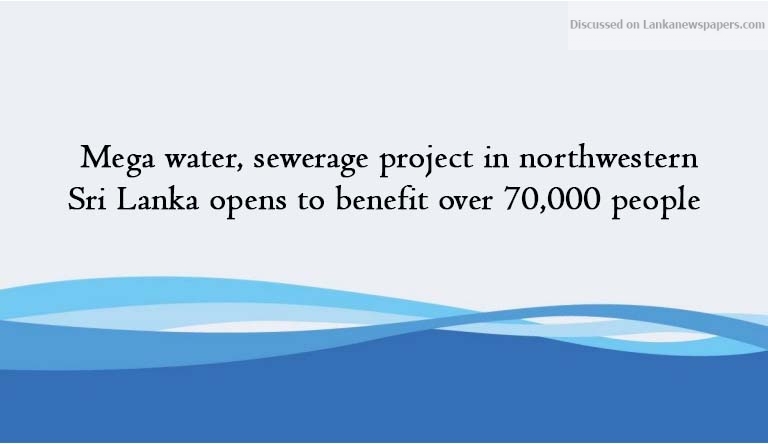 Sri Lankan Prime Minister Ranil Wickremesinghe on Monday inaugurated the Greater Kurunegala Water Supply and Sewerage Project in northwestern Sri Lanka which will solve the drinking and sanitation problem for thousands of people in the district.

This project will provide clean water for households, government and private sector offices, schools, hospitals, tourist hotels, a daily floating population of over 70,000.

The project will also facilitate the General Hospital in Kurunegala with a 24-hour water supply, whilst providing a strong sewerage network which will prevent contaminated water from spreading into lakes and wells.

It will also provide disposal of wastewater for 3,500 domestic and commercial institutions through its well-organized sewerage network.

The project was constructed by China Machinery Engineering Corporation (CMEC) in collaboration with Sri Lanka’s National Water Supply and Drainage Board.

Speaking at the launch of the project, Wickremesinghe said this project would take forward the development of the Kurunegala district, which is one of the main districts in the island country.

“Sanitation and water are two basic needs which we must provide to the people and I am glad to vest this project with the public today,” Wickremesinghe said.

Sri Lanka’s Minister of Urban Development, Water Supply and Drainage Rauff Hakeem said despite many hardships, the Greater Kurunegala Water Supply and Sewerage Project was completed, denying allegations that this project would pose a threat to the lakes and wells.

He said the government would launch similar projects in other areas where clean water was scarce with an aim of providing clean water and sanitation to all Sri Lankans by 2020.

Yang Zuoyuan, economic and commercial counselor from the Chinese Embassy, said the Greater Kurunegala Water Supply and Sewerage Project will boost the quality of life and protect the environment in Kurunegala, and the underground water and lake water quality will also be improved through the waste water treatment of this project.