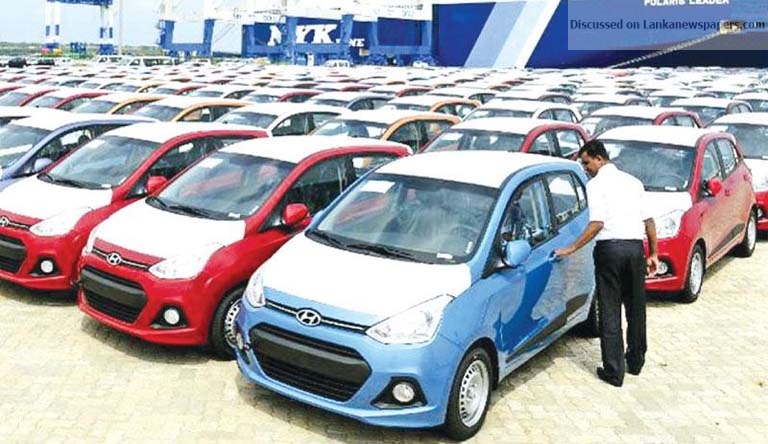 Mega rise in vehicle imports in first five months of 2018

Hard on the heels of the successful slamming of the brakes when tackling the sharp acceleration of gold imports that led to a heavy foreign exchange outflow in recent times, the Government last week decided to deploy a similar strategy to curtail an extraordinary spike in the volumes of smaller vehicle imports. Issuing a press release on Wednesday (01), the Ministry of Finance and Planning announced that excise duties on vehicles with engine capacity below 1,000cc will be hiked with immediate effect, following a gazette notification signed by Finance Minister,Mangala Samaraweera amending relevant regulations. Accordingly, import duty on non-hybrid gasoline-powered cars was increased to Rs. 1.5 million per unit while taxes on hybrid cars were raised to Rs.1.25 million per unit. The Ministry has however, announced that the new taxes will not be applicable to vehicles which opened Letters of Credit before August 1st 2018 and cleared before January 31st 2019. 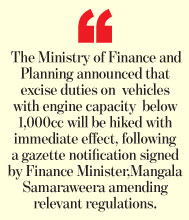 “The 2018 Budget introduced a new formula for import taxes based on engine capacity which was a definite incentive for first time vehicle buyers and effectively addressed the corruption that existed in vehicle importation under the old system. While we continue this methodology, we have observed a ‘tsunami’ of small motor cars being imported into the country which is a negative trend in the Balance of Payments that needs to be arrested,” Minister Samaraweera advocated at a press conference on Thursday.

Throwing light on recent statistics, the Minister pointed out that Sri Lankans have imported a staggering 24, 000 vehicles in the category of under 1,000 cc, during the first five months of this year alone which included nearly 1,000 vans brought in on a monthly basis. While this has made a severe drain on the country’s foreign exchange reserves, it contributed to the downward pressure of the Sri Lankan rupee against the greenback in recent times, the Minister highlighted.

“While the country spent a mere US$ 316.2mn on vehicle imports for the first five months of 2017, in contrast, spending on vehicle imports has more than doubled to US$ 666 mn during the first five months of 2018. Hence, this decision was taken following extensive deliberations with stakeholders and on the recommendation of the Central Bank,” Minister Samaraweera acknowledged.

Meanwhile, addressing a press conference on Friday, senior officials of the Central Bank defended the decision taken by the Finance Ministry. They noted that while the number of motor car registrations declined by 13.3% in 2017, however, during the first six months of 2018, import volumes had increased sharply by 114% to 41,000 from a mere 19,000 units in the corresponding period of 2017.

“In the short run, this deterioration in the trade deficit had to be addressed. Because when the trade deficit deteriorates so much and the current account in the Balance of Payments deteriorates, we have to borrow more from abroad. As the Balance of Payments gets worse, there is pressure on the exchange rate,” Central Bank Governor, Dr. Indrajit Coomaraswamy said adding that any exchange rate depreciation, consequently, adversely affects the cost of living. 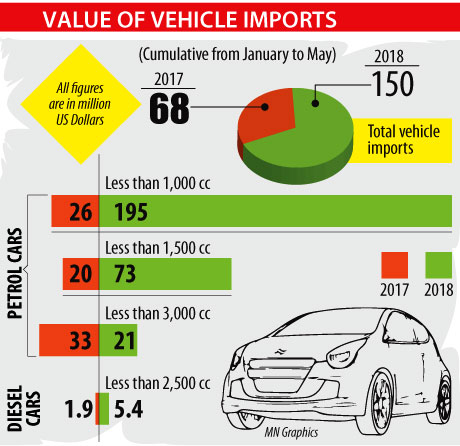 “So, you need to do something particularly in the interest of the poor and the vulnerable to make sure that this deterioration is arrested so that the decline in the Balance of Payments does not lead to an unwarranted pressure on the exchange rates,” the Governor elaborated.

When asked why there wasn’t a blanket-targeting of cars but only a specific segment of cars targeted for the latest hike, Governor Coomaraswamy explained that this could be because the smaller cars in terms of value had contributed in larger extent to the foreign exchange outflow.

“If you take petrol cars less than 1,000 cc, although in 2017 the total value of imports was US$ 26 million, this has increased to US$ 195 million in 2018. Similarly, for petrol cars of less than 1,500 cc, although the value of imports last year was US$ 20 million, this has risen to US$73.2 million this year. These statistics reflect that imports of smaller cars were mainly responsible for increase in import value of motor vehicles,” Central Bank’s Deputy Governor, K D Ranasinghe said.

Releasing the External Sector Performance for the month of May 2018, the Central Bank of Sri Lanka had recently stated that Sri Lanka’s trade deficit expanded by 17% to US$ 4.5 billion in the first five months of 2018.

Accordingly, import expenditure on personal vehicles, categorised under consumer goods, increased significantly in May 2018 owing to substantial increase in imports of small engine capacity vehicles, hybrid and electric vehicles, the country’s financial watchdog indicated. Central Bank data also showed that the value of vehicle imports in the month of May increased sharply by almost 120% from US$ 68 million in May 2017 to US $ 150 million in May 2018.