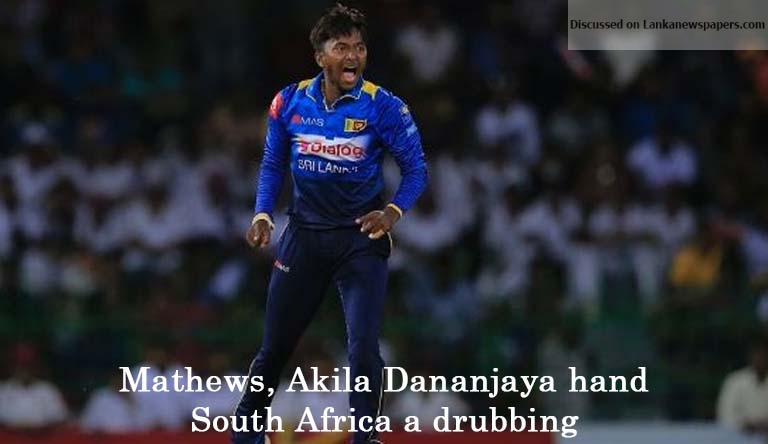 A dominant all-round performance from Sri Lanka took them to a second consolation win in the series against a South African side whose depth proved shallower than comfortable. Angelo Mathews’ run-a-ball 97 propelled Sri Lanka to 299 on a slow surface before Akila Dananjaya’s career-best figures of 6 for 29 had South Africa’s line-up in a spin, again. They were dismissed inside 25 overs for their lowest total in, and against, Sri Lanka.

Sri Lanka’s innings had its foundation rooted in four fifty partnerships and its fireworks in the last ten overs. Mathews, with help from Thisara Perera and Dasun Shanaka, ensured Sri Lanka plundered 93 runs between overs 40 and 50 to ask South Africa to pull off the highest successful chase at the Premadasa Stadium and they did not even get close. Quinton de Kock’s second half-century of the series saved some blushes but no other batsman made more than 20.

At the other end, South Africa’s bowling effort was an unusual mix of attack and leak with Keshav Maharaj their standout performer. Maharaj put in the most economical performance of his short ODI career as he found turn and proved difficult to get away. Kagiso Rabada, brought into the XI in place of the leading wicket-taker in the series Lungi Ngidi, was the best of the quicks while Junior Dala, Wiaan Mulder and Andile Phehlukwayo shared five wickets between them. Their inexperience, however, reflected in their inconsistency.

Rabada and Dala started with five boundary-free overs to put early pressure on the hosts. As though to make up for lost opportunity, Niroshan Dickwella took three fours off Dala’s third over as he lost his lengths. Dala did have something to celebrate in his second ODI. He claimed his maiden wicket in the format when he held his length back and Upul Tharanga edged to de Kock. The short ball also brought Mulder a wicket, when Kusal Perera slashed at one and sent a catch to cover.

Still, the wickets did not slow the runs and Sri Lanka’s 100 was scored in 99 balls. It was up to Maharaj to pull things back and he did. He was introduced in the 18th over and treated with respect from Mathews, who knew runs would come at the other end. Mathews drove a Phehlukwayo slower ball through mid-on, a Rabada length ball through mid-off and another in the ‘v,’ to establish his authority.

Maharaj was rewarded for his persistence when he drew Kusal Mendis forward to play away from his body and found the edge. The fall of that wicket sent Mathews into a shell and another five boundary-free overs were bowled. Sri Lanka scored 48 runs in the 11 overs between 26 and 37 while Maharaj bowled out, conceding his only boundary when Dhananjaya de Silva pulled a long-hop over midwicket. But once Maharaj completed his quota, Sri Lanka could free their arms.

De Silva was too hasty and tried to smack a Mulder slower ball down the ground, and gave Reeza Hendricks at mid-off a high catch but Mathews finished the over by flat-batting Mulder for four to make it clear who was controlling the proceedings.

At the end of the 40th over, Mathews brought up his fifty with a single off 66 balls. His next 47 runs came in 31 balls and included delights such as a sweep for six off Duminy, a cut off Phehlukwayo, and an array of pull shots as the young quicks over-relied on the short ball. Thisara Perera didn’t really get going and sliced a cut to Hashim Amla at backward point but Dasun Shanaka’s 15-ball 21 came in handy. Shanaka was dismissed in the final over, when Mathews needed six runs for a century but only managed three singles, finishing three runs short of a first hundred in Sri Lanka and against South Africa. He won’t mind too much because his bowlers skittled out the opposition in half the time they had at their disposal.

South Africa’s chase started on the back foot when Amla was bowled for a duck. A beauty from Suranga Lakmal pitched on middle and seamed away to remove the off-stump bail.

Aiden Markram, who was included after missing the last two matches, looked determined to better his record on this tour. He took three successive boundaries off Lakmal before failing to read an Akila googly and popping up a simple return catch. Hendricks was bowled the next ball, by another googly. In the next over, Heinrich Klaasen, too, didn’t pick the Akila wrong’un and was struck below the knee roll in front of middle, leaving South Africa 39 for 4.

De Kock and JP Duminy’s partnership was South Africa’s best chance of staying in the game, and they put on 46 together before Duminy danced down to a de Silva length ball and only got a leading edge to offer a return catch. De Kock brought up 50 off 53 balls in the same over but would have known it was only a matter of time.

Mulder was out lbw to Lahiru Kumara and, in the next over, de Kock was bowled by an Akila ball that turned past his outside edge. Akila’s fifth came with a stroke of mastery. He pushed Phehlukwayo back with a quicker one and then drew him forward with a slower one and took the edge. His sixth was Maharaj, who threw his bat at a legbreak and was caught at mid-off which allowed Akila to leapfrog Lungi Ngidi as the leading wicket-taker in the series.

The 3-2 series scoreline will suggest it was a tight contest. It wasn’t. The result of this match is a more accurate reflection of the tour as a whole. It was one-sided but for the fourth ODI and only showed both sides there is plenty to be done before the 2019 World Cup.