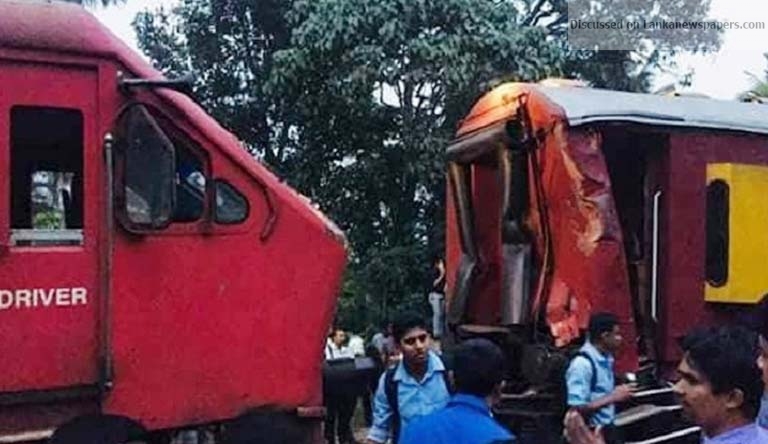 Four railway workers have been interdicted in connection with Monday evening’s train accident at Panaliya, near Polgahawela.

Over 30 passengers were injured after two trains collided at Panaliya.

A Transport Ministry spokesman said the driver, assistant driver, the chief guard and the assistant guard were interdicted pending an inquiry. Minister Nimal Siripala de Silva had directed to appoint a special three-member committee to conduct a comprehensive inquiry into the accident.

The Committee has started investigations and is recording evidence, the spokesman said. The Committee has been tasked to ascertain reasons for the accident and recommend measures to prevent such incidents in the future and also to compile a report on damages.

The minister had ordered the Railways General Manager to take strict action against anyone found guilty, the spokesman said.

Over 30 passengers were injured when the Rambukkana bound train rammed into the Colombo-Kandy train which was halted at Panaliya.

The injured were rushed to the Polgahawela and Rambukkana hospitals and several passengers were in a critical condition. According to a Sri Lanka Railways spokesman, a technical fault may have caused the accident.

He added that a train plying from Colombo to Kandy had developed a technical fault and stopped at Panaliya near the Polgahawela Railway Station at around 4.30 p.m.

“The Rambukkana bound train which was travelling at high speed on the same track, had rammed into the Colombo bound train resulting in severe damage to the guard’s compartment,” the Spokesman said.