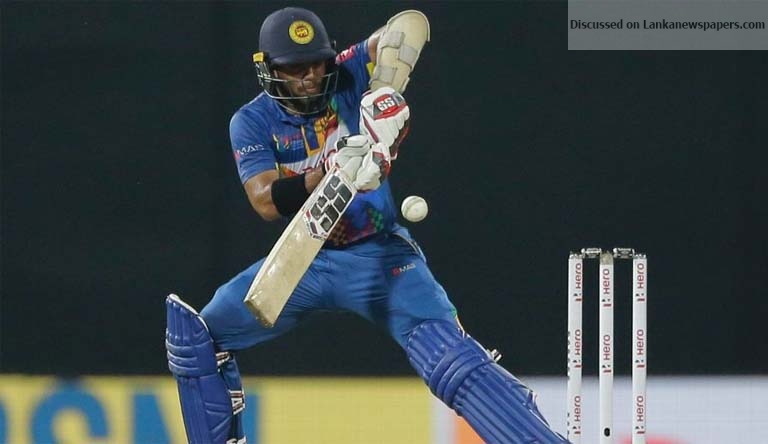 Just how far this Sri Lanka top order has to go in ODIs could not have been made more clear in the first match on Sunday. Batting coach Thilan Samaraweera said his team had spoken about seeing out the likes of Kagiso Rabada in the first 10 overs, before taking more risks against the less experienced South Africa bowlers later in the innings, but the hosts nevertheless found themselves 36 for 5 in the ninth over, the game already virtually lost inside 40 minutes.

Kusal Perera and Thisara Perera then struck up an encouraging partnership worth 92, but it never looked like the kind of stand that could alter the game’s outcome. This is exactly how so many Sri Lanka innings have played out over the past 18 months – the majority of the batsmen failing dramatically, while one or two others make half-decent contributions that serve only to make the loss less abject.

South Africa will be glad to have tasted victory for the first time on the tour, but they know they are not exactly a world-beating ODI unit either. They have spoken about blooding young players in this series, and on Sunday, one of those players, left-arm wristspinner Tabraiz Shamsi, came good, taking 4 for 33 to wipe out the Sri Lanka lower order after the seamers had made those early breakthroughs. With regular spinner Imran Tahir rested for this series, Shamsi has a gold-plated chance to carve out a place for himself in the ODI XI.

Others, such as Wiaan Mulder, Aiden Markram and Lungi Ngidi, also have opportunities to embed themselves in the side as the series goes on.

Normally, South Africa tours of Sri Lanka mean runs for Hashim Amla. In ODIs, there is no other country he would prefer batting in, having hit two hundreds in his six innings on the island, with an average of 62. On this tour, though, Amla’s scores (across Tests and the first ODI) have read 15, 0, 19, 6, and 19. And while his prowess against spin has truly stood out on previous trips, spinners have dismissed him on each occasion this time, so far. He had also crossed fifty only once in six innings in the ODI series against India earlier this year. South Africa’s coaches are certain he will rebound, but at 35, a few more modest scores could get fans wondering whether this is merely a slump or a more permanent decline.

The man to dismiss Amla in that first ODI was Akila Dananjaya whose new-and-improved googly (he has been working on pushing it faster through the air), fooled the batsman and rattled his stumps. Dananjaya is not always a penetrative bowler, but he is very rarely expensive, which on its own is a not insignificant virtue in this modest Sri Lanka attack. While Sri Lanka attempt to get the rest of their team in order, Dananjaya has done enough over the past eight months to suggest he is a player worth investing in. Even if he has the occasional bad game – though he really doesn’t have many of those – Sri Lanka might do well to play him in as many matches as possible leading up to the World Cup.

South Africa are likely to keep their XI from Sunday, which means Heinrich Klaasen will probably continue to sit out, while Mulder plays as an allrounder.

Sri Lanka will be without fast bowler Lahiru Kumara, who split a webbing on his left hand during fielding drills. Kasun Rajitha is most likely to play in his place. They may also think about handing left-arm spinner Prabath Jayasuriya a debut, with Lakshan Sandakan the most likely to sit out if that happens.

Despite Sri Lanka’s collapse, there were no major demons in the Dambulla track on Sunday, and another good one-day pitch is expected. No rain is forecast for the day.