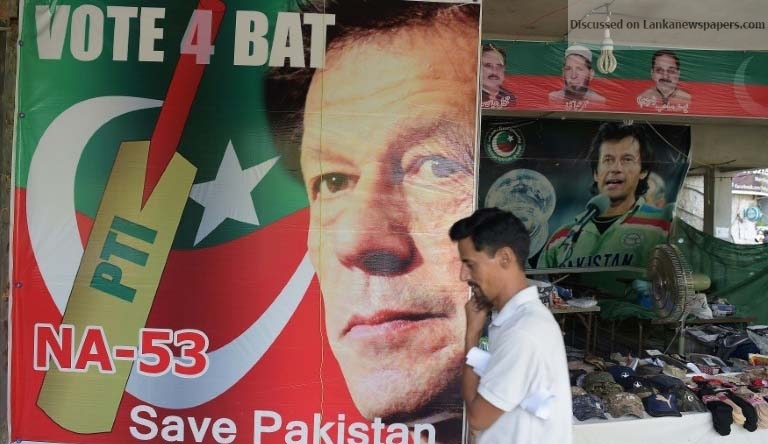 Imran Khan’s party said it has begun talks with independents and small parties to form a coalition government after a resounding triumph in Pakistan’s general election, as rival parties planned protests over alleged vote rigging.

Khan’s Pakistan Tehreek-e-Insaf party (PTI) won 116 seats in Wednesday’s ballot, short of the 137 needed for a simple majority but a surprisingly strong showing that helped fuel suspicion of rigging.

Khan’s party has begun reaching out to potential coalition partners to form a government, according to spokesman Fawad Chaudhry, a task that analysts said should be straightforward.

“We have contacted small parties and independent members, they will soon meet party leaders in Islamabad,” Chaudhry said late Friday.

A PTI representative later added that the party was hoping to form a government within two weeks before Pakistan’s independence day celebrations on August 14.

“We expect that Imran Khan will take the oath as a prime minister before August 14,” PTI representative Naeem ul Haq told reporters Saturday.

Haq’s comments followed an announcement by rival parties a day earlier vowing to launch a protest “movement”, after foreign observers voiced concerns about the contest.

More than a dozen parties calling themselves the All Parties Conference (APC) promised to protest over the results.

However the group remained divided with some parties pledging to boycott joining the National Assembly and others calling for a new vote.

The PML-N announced its support for the group but stopped short of saying it would boycott the new parliament.

And the Pakistan Peoples Party (PPP), which was notably absent from the APC, said in a separate announcement that it rejected the results, but vowed to try to convince the other parties to participate in the parliamentary process.Retired general and analyst Talat Masood said the APC may succeed in sparking pockets of unrest but did not see the movement upsetting stability at the national level.

“Opposition parties are divided and they are not genuinely in a mood to form any major opposition. I don’t think they have this stamina and the support of the people for going for a big movement,” said Masood.

The protests announcement late Friday came as the United States, the European Union and other observers aired reservations over widespread claims that the powerful military had tried to fix the playing field in Khan’s favour.

Khan’s victory represents an end to decades of rotating leadership between the PML-N and the Bhutto dynasty’s PPP that was punctuated by periods of military rule.

The vote was meant to be a rare democratic transition in the Muslim country, which has been ruled by the powerful army for roughly half its history.

But it was marred by violence and allegations of military interference in the months leading up to the vote, with Khan seen as the beneficiary.

The former cricket star will face myriad challenges, including militant extremism, an economic crisis with speculation that Pakistan will have to seek a bailout from the International Monetary Fund, water shortages and a booming population.

He will also have to contend with the same issue as many of his predecessors: how to maintain a balance of power in civil-military relations.