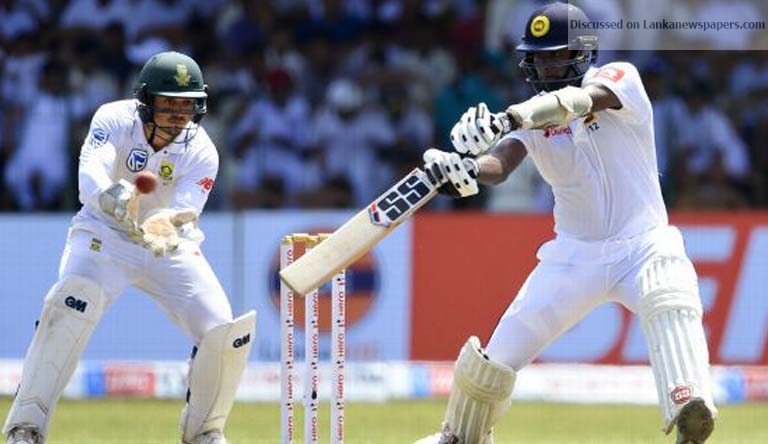 South Africa dragged the second Test into a fourth day with their best batting performance of the series against a sloppy and frustrated Sri Lankan attack. The hosts squandered four clear chances and had three unsuccessful reviews (all on umpire’s call which allowed Sri Lanka to retain their reviews) which could have seen them well into South Africa’s lower order. Instead, they gave the home crowd reason to return on Monday, when Sri Lanka will go in search of the remaining five wickets.

Theunis de Bruyn gave the best account of himself as a international cricketer in his short career and remained unbeaten on 45. He also featured in South Africa’s highest partnership in the match, 57 runs for the second wicket with Dean Elgar, who made his top score of the series – a dogged 37.

Elgar’s innings was incident-filled and he was let off three times, with Dilruwan Perera tainting his 36th birthday by being the culprit on each occasion. First, Dilruwan dropped a catch when Elgar top-edged a sweep off Rangana Herath in the third over. Dilruwan, running from square leg, settled under the ball but could not hold on to it. Then, Dilruwan overstepped after bowling Elgar on 6. Elgar had swept against the slider and missed. Dilruwan didn’t get his front foot back and bowled two more no-balls, one in the third session which had Elgar caught behind on 23. Elgar had left the field but was called back and added 14 runs to his score before Dilruwan finally had him out lbw, going back to the arm ball.

In between, Mathews dropped Markram at slip, off Rangana Herath. Herath only had to wait until his next over to trap Markram lbw. The opener missed an attempted sweep and gave Sri Lanka their first inroad.

But Sri Lanka and Dilruwan had more to rue when two reviews didn’t go their way, which could have dismissed de Bruyn before he settled. Though de Bruyn swept confidently from the start of his innings, his defences looked suspect. Dilruwan beat his outside edge and reviewed for lbw off two consecutive deliveries. Both times the deliveries pitched in line and struck de Bruyn on the back foot with the impact in line with the stumps but both times Umpire Rod Tucker’s on-field decision was not out. Both times ball-tracking showed umpires call on off stump, giving de Bruyn second and third chances to make a name for himself. And he took them. He is only five runs away from his first Test fifty and he has showed the kind of patience his seniors have lacked.

Hashim Amla’s lean year showed no signs of stopping. Sri Lanka reviewed an lbw appeal against him when Akila caught him on the pad as he looked to sweep but the batsman had shuffled across enough to get outside the line. He was on 4 at the time, and added only two runs before being bowled by Herath. Faf du Plessis became the only South African batsman to cross 100 runs in the series when he added seven runs to the 98 he had scored in his three previous innings. His innings, however, ended when was caught at slip off an Akila wrong’un.

With his next ball, Akila had nightwatchman Keshav Maharaj out lbw, also with a googly, but he could not complete the hat-trick. Temba Bavuma was unintimidated by a close-in field and a topspinner and went on to produce a sprightly knock that he will want to build on. That’s all South Africa’s middle and lower order can aim for, in the face of a mammoth target.

Earlier, Sri Lanka batted until an hour into the lunch session and declared with a lead of 489 runs. Dimuth Karunaratne took his personal tally in the two-Test series to 356 runs and fell 15 runs short of a second century. After hours of concentration, he chased a Lungi Ngidi length ball and edged it to Quinton de Kock. He shared a 63-run stand with Angelo Mathews, who returned to form with his first score over fifty since December 2017. Mathews also put on 64 with Roshen Silva to frustrate a wearing South African attack.

By the time the second new ball was due, South Africa were using Maharaj on one end and rotating part-timers at the other to spare the frontline quicks from the drudgery. Kagiso Rabada and Ngidi bowled eight and nine overs respectively, while Dale Steyn carried the heaviest workload, with 11 overs. Steyn went wicketless, though, which means he will have to wait until the Boxing Day Test against Pakistan at home to overtake Shaun Pollock as South Africa’s leading wicket-taker. Steyn drew level with Pollock on 421 wickets in this match.

But the bowling honours belonged to Maharaj, who sent down 81.1 overs in three days and finished with 12 for 283. Sri Lanka’s batsmen, Mathews in particular, took Maharaj on, often with success but eventually gave South Africa’s sole specialist spinner some reward.

Mathews eventually chased a length ball that carried to du Plessis at knee height. Sri Lanka faced 11 more balls before calling time on their innings, giving themselves the runs and the time to bowl South Africa and claim a series win.