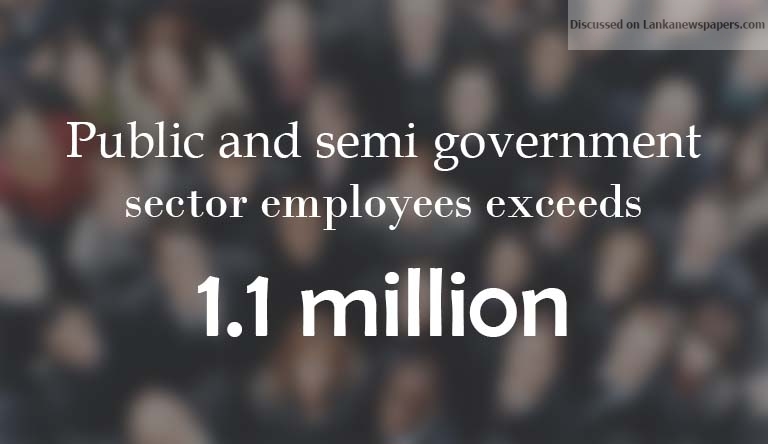 The importance of public sector is an indisputable social and economic reality throughout the world. The Public Sector usually comprises of organisations that are owned and operated by the government and exist to provide services such as public education, health care, national defence, military, police, infrastructure (public roads, bridges, tunnels, water supply, sewers, electrical grids, telecommunications, etc.) for its citizens.

Recognising the importance of the Public and semi-government sector employment statistics, the Department of Census and Statistics (DCS) has conducted periodic Censuses of Public and Semi Government Sector Employment. The first such Census was taken in 1980. Subsequently, censuses were carried out in 1985, 1990, 1994, 1998, 2002 and 2006 at intervals of four to five years. Since the devolution of power to Provincial Councils in 1987, employment censuses from 1990 onwards covered both the Central Government and Provincial Councils.

The latest round of the Census of Public and Semi Government Sector Employment was conducted by the DCS between 9.30am and 11.30am on 17 November 2016 and it is the eighth in the series of such censuses. The findings presented here, are based on data gathered through questionnaires personally completed by more than 1 million employees in these two sectors. This census did not cover the uniformed staff of the three forces: Army, Navy and Air Force.

The information collected at this census include sector of employment, age and sex, marital status, nature of appointment, level of education, major occupation group, professional/ vocational qualifications, language skills, district of the place of work, mode of travel to work, non- communicable diseases, level of ICT literacy etc. of the employees. Key findings of this census are presented here.

Number and Proportion of Employees

The total number of employees in the Public and Semi Government sectors excluding uniformed staff of the three forces: Army, Navy and air Force, as at 17th November 2016 was enumerated as 1,109,475. Of the total employees, 55.1 percent are males; 44.9 percent are females. In any employment census, it is usual to determine the employees as a percentage of the total population and as a percentage of employees of all sectors (including all other sectors). Total number of employees is estimated quarterly as well as annually through Sri Lanka Labour Force Survey conducted by the DCS.

Public and semi government sector employees constitute five percent of the population in the country. The proportion is the same across provinces, with the exception of North Central and Uva Provinces where it is six percent and the Western Province where it is four percent.

As a proportion of all employees i.e. in all sectors, public and semi government employees are 14 percent. This proportion is highest (18 percent) in the Eastern Province and lowest (11 percent) in North Western and Sabaragamuwa provinces.

The census covered 32,750 institutions of which the majority belong to the central government. Majority of institutions coming under Provincial Councils comprise of schools and hospitals functioning under the nine provincial councils.

Nature of the appointment of employees was considered under ‘Permanent & pensionable’, ‘Permanent, pensionable & contributing to a provident fund’, ‘Permanent & contributing to a provident Fund’, ‘Temporary’, ‘Substitute’, ‘On contract basis’, and ‘Other’ categories. Ninety-five percent of public and semi government sector employees are in permanent positions. Further, 79.4 percent of all employees are entitled to a pension after retirement. More female employees were in permanent and pensionable employment (83.7%) relative to their male counterparts (69%).

In order to assess the level of education of public and semi-government sector employees, the highest level of education was categorized into ‘Below GCE(O/L)’, ‘Passed GCE(O/L)’, ‘Passed GCE(A/L)’, ‘Degree’, ‘Post Graduate Diploma’, ‘Post Graduate Degree’, and ‘PhD’.
Over one third (35%) of public and semi government employees are GCE (A/L) qualified and little over one fourth ( 26.1 %) have degree or higher qualifications. It is noteworthy that 190,498 employees or 17 percent employees have not passed the GCE (O/L) examination. Among males this percentage is as high as 27.2% while among females it is only 4.8%. Further, having degree or higher level qualification among female is very high (36.7%) compared males (17.6%). There are 290,378 graduates employed in public and semi government sectors. Of them 2,014 have reported to have more than one basic degree. More than half graduates (54%) have degrees in the arts stream while Management/ Commerce graduates are 14.3%, and Science graduates only 10.4%.

Six hundred employees are stationed in other countries in diplomatic missions, banks and other institutions.

Employees were asked how they travel to and from work: ‘Walking’, ‘Bus’, ‘Train’, ‘Assigned Official Vehicle’, ‘Official Group Transport’, ‘Private Motor Vehicle’, ‘Staff Service’, ‘Taxi’, ‘Motor Cycle’, ‘Foot Bicycle’, ‘Other’. The majority of employees (42%) use public transport to travel to work and it is noteworthy that almost one in four or over 277,000 employees use motor cycle to travel to work.

Non-communicable diseases (NCDs) are a growing issue. The workplace is recognised internationally as a crucial to address these health issues. Employees in any institution represent an important population category: their quality of life, health awareness, and ability to embrace healthy behaviours are expected to influence their productivity, avoid NCD occurrence, and reduce healthcare costs.

The most common self-declared NCD is diabetes. Almost 6 percent of employees suffer from Diabetes – more males (7 percent) than females (4.5%). The second most common NCD is (5.3%) was high blood pressure.

While Sinhala and Tamil languages are considered as official languages, English language is considered as the link language in the country. All employees were asked the level of their proficiency in ‘Reading and Writing’ and ‘Speaking’ of each language as ‘Good’, ‘Average’ and ‘None’.

Just over 84.2 percent report “good” proficiency in reading and writing in Sinhala language and 16.5 percent in Tamil Language. These percentages on the ‘speaking’ proficiency are 85.1 percent and 16.6 percent respectively.

In general, communication skills in English have been identified as an important workplace tool for success in business and have been correlated with career success and increase in financial rewards. The self-declared good proficiency in ‘Reading and Writing’ and ‘Speaking’ proficiency in the link language (English) of the public and semi government sector employees are 23.7 percent and 15.1 percent respectively.

Ability to use computers, email and internet

Technology is an integral part of the 21st-century workplace that any business without some level of technical savvy is likely to fail. It is that critical. Information and Communication Technology (ICT) can be used to eliminate non‐value‐adding tasks or to make them more efficient. ICT can also improve employee welfare, for example, through transforming the content of work by deleting unimportant activities. In this census information on self-declared ability to use computers, e-mail and internet was collected from all employees.

Out of all public and semi government sector employees, 38.4 percent have said that they can use e-mail. Among males it is 34.7 percent while among females it is 43.0 percent.

According to the literature, attempts to improve performance of the public sector have had mixed results in many countries. A precondition for new improvement programs to succeed where earlier efforts have failed is that they should focus on improving precisely those factors that make a public service organization perform well. These success factors have been identified as high quality of management, high quality of workforce, long-term commitment, open and action-oriented culture, and a culture of continuous improvement and renewal.

The report titled “Census of Public and Semi Government Sector Employment – 2016” released by the DCS, presents a wealth of information on the employees of these two sectors. A few basic but important features of the employees is the high female participation that has resulted in near equality in numbers, still youthful but a large elderly age structure, relatively low levels of education, still to be achieved standards of information and communication technology. Each of these has major implications such as the need for gender responsiveness, using strategies to maintain the dynamism while optimising experience and expertise, facilitating options for knowledge and skill enhancement of the employees. Recognising and responding to these implications will help to make the employees a satisfied workforce, predicting and preparing for future trends, as well as enabling the employees to deliver their services up to high standards. Information provided in this publication merits further analysis to produce policy and pragmatic guidance. They can be used to make informed decisions, to further improve performance of public sector workforce to more effectively and efficiently provide public services to the citizens of this nation.