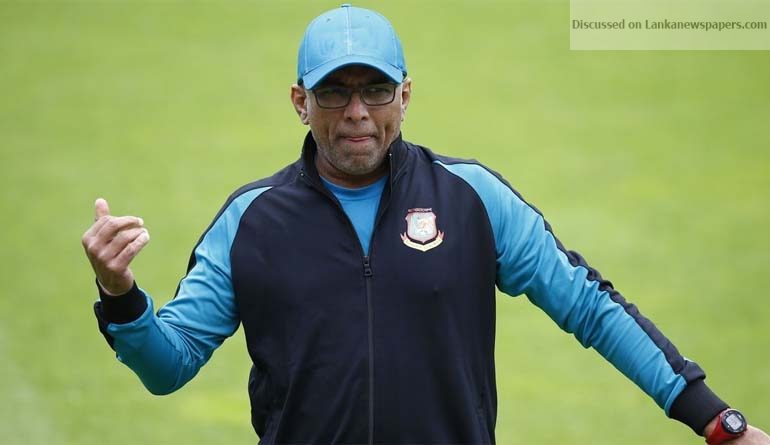 I have picked the best for the future – Hathurusingha

Will the Sri Lanka stint be the Waterloo of his remarkable coaching career? Or else, will he be able to guide the struggling Lankans out of the woods? It’s too early to make predictions.

Anyway, Sri Lanka’s most talked-about cricket coach has designed his own plan, irrespective of all the criticism, and the expectations. Here is how Chandika Hathurusingha, probably one of the most sought-after cricket coaches of our times, airs his views on the challenges before the future of Sri Lankan cricket.

On your preparations for this West Indies tour:

When we arrived here, the West Indies were already behind our rankings. Before coming, we knew that they are giving us fast tracks. We were prepared for this challenge in Sri Lanka and that became useful. We improved by every Test. The Kensington Oval wicket (where the last Test was held) is one of the fastest in the world. The ‘Duke’ pink ball also assists the pacies.

There were huge expectations when you took over the job. But the team is yet to fall on the right track. You’ve lost a tri-series at home as well.

It’s only six months since I came. We’ve won only one series so far. That was beating Bangladesh away from home. Then we lost a series at home. I’ve told the players the first thing is to stop losing at home. The good sides lose at home very rarely. We should do the forthcoming South Africa and England home series well. Then the atmosphere to win overseas can be created. I think, by mid next year we’ll be in a fare position.

Sri Lanka is hampered severely by the injury plague.

We struggle heavily in this tour due to injuries. Rangana Herath, Nuwan Pradeep and Dushmantha Chameera suffered injuries. But they’ll come back to the side. In spite of this, we need to go forward.

In this respect, we need to manage our players well. Lahiru Kumarais is 22 but he bowls regularly at 145kmph. So, we won’t play him regularly in the domestic matches. It’s essential to manage the players before they start having an injury.

What is the purpose of having more than 15 players in the squad when you’re on tour?

We need to give exposure to the youngsters. We brought Jeffrey Vandersay, Asitha Fernando and Dasun Shanaka not essentially to play but to give them top-level international exposure. We allow them to be with the team in the same dressing room, particularly at pressure situations. I did the same thing when I coached in Australia and Bangladesh. Some of the players who travelled early with the Bangladesh team are now doing well for them. It’s an investment for the future.

I have a saying at selecting the squad as well as the playing eleven. Earlier our selections were too much dependent on the player statistics. We’ve introduced a change. Now we look into other aspects as well. You can’t keep on changing the players saying the side is on a transition. Consistency is something very essential. That’s why I’ve picked a 25-member pool aiming at all three formats. Let’s see how it goes when we approach the next World Cup! It doesn’t mean that these are the only players who are to play for Sri Lanka in the next ten years or so. There are ones who can go on for five or ten years. And we should not drop a player after giving him just a couple of games. In the meantime, we’re keeping an eye on the best players emerging from our domestic circuit as well.

You’re different from other coaches. You demand your assistants and not willing to coach if those demands are not met. Why?

If I’m given a job, things should happen in my way. Otherwise how can I take the responsibility? If I’m to go to war, I need the arms. If I’m to coach with ones who are here because someone else wanted it, then that someone can coach. Not me.

How did ‘Chandika Hathurusingha’ become a much talked-about coach?

I work in my own way. I always had an open mind as to how today’s game is played and how I should improve in my job. I always wanted to do a new thing. I didn’t go on doing the same thing on and on. I don’t have a set batting or bowling order for matches. They’re always changed according to match situations. This will be the same in future too.

You coached Bangladesh against your mother country which you represented with pride some time ago. You coached them to beat Sri Lanka at a venue which was your own club. How did one do like that?

I’m not an emotional person. I’m paid for a job. I consider this as a profession. If I am to do my job well, I should do it for my team. Not the opposition.