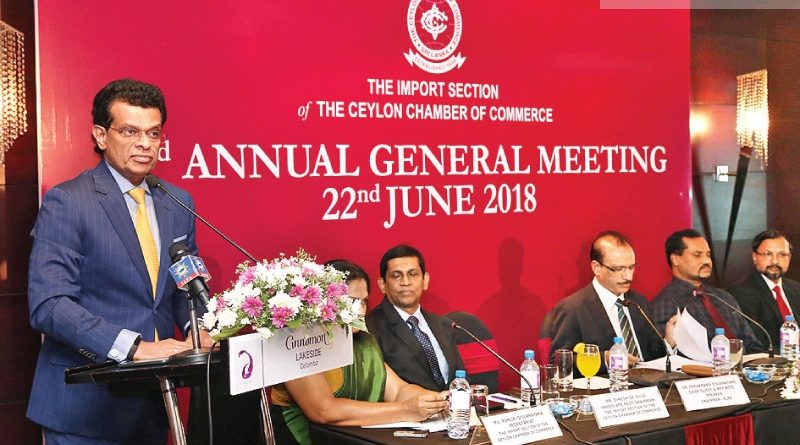 Sri Lanka Ports Authority (SLPA) during the corresponding period of 2017 had earned a record net profit of Rs. 13.2 billion and became the 13th best connected port in the world.

SLPA, Chairman Dr. Parakrama Dissanayaka made these remarks at the 83rd AGM of the Import Section of the Ceylon Chamber of Commerce held in Colombo.

He further said this Rs. 13.2 billion net profit, is recorded as the highest profit that the SLPA has ever earned due to the tireless effort and the team work of all Port Authority employees. He also said during the first five months of this year the transshipment volumes in the port of Colombo has significantly increased by 19%.

Chairman Dissanayaka also announced that SLPA has ranked as the 23rd largest container port in the world.

“We Sri Lanka being a small nation with 21 million people our Ports Authority handles nearly 6.2 million containers an year while our neighboring India with a total population of 1.2 billion handles only 15 million containers,”

He also mentioned that during the past years despite all obstacles our Ports industry has done well and as a result we are now handling 6.2 million containers.

Speaking on the invaluable service and the significant contribution made by the Import Section of the Ceylon Chamber of Commerce, Chairman Dissanayaka said in 2017 the Port of Colombo handled 668,000 TEU’s import containers against 272,000 TEU’s of export containers and this situation shows the contribution the Import Section made to Sri Lanka Customs and to the Sri Lanka Ports Authority He also said during the first five months of this year the transshipment volumes in the port of Colombo has significantly increased by 19%.

He said there was a tender recently for setting up of a Marina Yacht Terminal which also benefit to develop the country’s tourism sector.

Chairman Dissanayaka added the SLPA has launched a feasibility study for the development of the Colombo North Port and already signed an MoU for the establishment of an engine plant for the Colombo South Harbor.

Ceylon Chamber of Commerce, Import Section, Chairman Nishan Nanayakkara said this is a challenging year to our importers due to escalating global material prices, domestic tariff changes, currency depreciation, increase in fuel prices and adverse weather conditions which has negative implications to our economy and also hurt the competitiveness of our exports. He said expenditure on imports has increased by 9.4 percent to US dollars 20,980 million in 2017, recording the historically highest value for imports, mainly due to higher fuel imports.