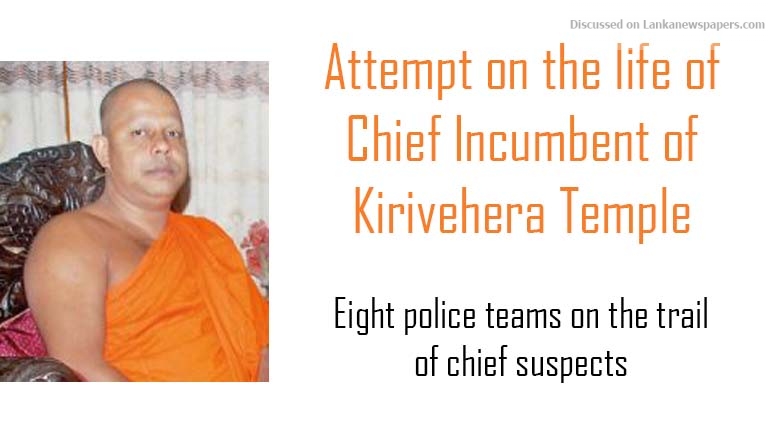 Eight police teams on the trail of chief suspects

Eight separate police teams were deployed yesterday to arrest former Chief Kapuwa (lay custodian) of the Mahasen Devalaya of the Kirivehera temple and his brother over the shooting and injuring of Chief Incumbent of the temple Ven. Kobawaka Dhamminda Thera and another monk Vidamagama Sobitha Thera on Tuesday night.

Three persons had carried the attack at about 10:50 pm on Tuesday after arriving there in a jeep.

A senior police officer said that when the police traced the jeep used by the attackers, its engine was still hot. Further probing revealed that it was owned by the former Chief Kapuwa.

Several other suspects have already been taken custody for the attack.

Recently, the Chief Incumbent of the temple won a court case against the ex-Kapuwa.

Police have also recovered two shotgun cartridges left by the attackers at the scene and police have established that a shotgun had been used in the attack.

Further investigations are being conducted by the Kataragama police on the instructions of Tangalle Superintendent of Police.