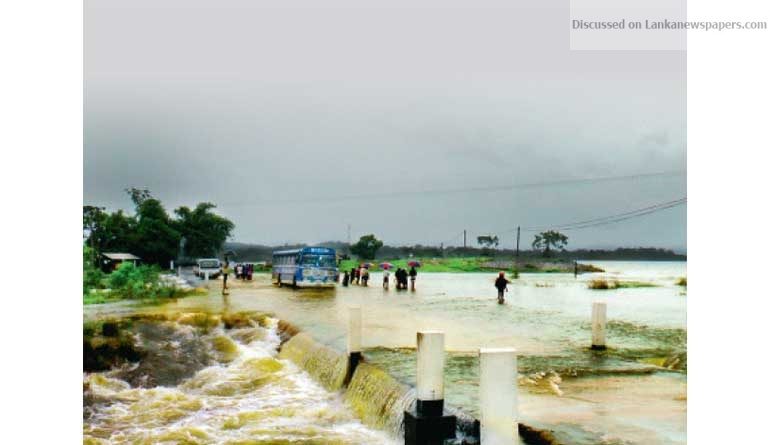 The death toll due to floods and landslides has risen to 13 by last evening, while 32,136 families have been displaced, Director General, Disaster Management Centre (DMC), Dr. S. Amalanathan said yesterday.

Addressing a media briefing,Dr. Amalanathan said 125,954 individuals have been affected in 19 districts due to the inclement weather.

Five deaths due to lightning strikes, five by drowning, while one due to landslides and another two deaths due to trees falling on them were reported. Eight people have also been injured due to the inclement weather.

“According to the National Building Research Organization (NBRO), early warning alerts were given to four Districts. The NBRO has advised 29 individuals from the Kalutara District, two families from the Kegalle District, five from the Nuwara Eliya District and 16 from the Ratnapura District to relocate,” he said.

Meanwhile, the Department of Meteorology says it has recorded a reduction of rainfall in many parts of the island during the 18-24 hours, which ended yesterday morning.

The highest rainfall of 122.7mm was recorded from Mallawa in the Puttalam District while Avissawella received 92.6mm rainfall.

Ratnapura recorded 68.4mm, while Nivithigala (92.2mm), Galle (69.7mm), Mannar (54.7mm), and Colombo (55.8mm) received substantial rainfall.People who were at flood risk have been evacuated to safer locations and to a number of welfare centres. Approximately, 13,832 families have been evacuated into 251 welfare centres due to flood and landslide risks in 10 Districts.

However, according to the DMC, water levels in most rivers were receding as of last afternoon.

“Compared to the last three days, water levels of the Kelani River receded 12 metres from 18 metres. The two spill gates of the Rajanganaya Dam and the Deduru Oya spill gates were opened on Wednesday to reduce water levels,” Dr. Amalanathan added.

The Disaster Management Relief Services Centre has allocated Rs 54 million for cooked meals, dry rations and other essential items.
In the upcoming 24 hours Sabaragamuwa, Uva and the Western Province could receive 100-150mm of rain and a 500mm rainfall is expected in the Northern Province.

The Department of Irrigation has indicated that water levels in several major rivers, which were at flood levels earlier had receded as of yesterday morning. However, the recorded rainfall was minimal in the major river catchment areas during the past 24- hours, ending at 8.30 yesterday. Flood levels are expected to decrease gradually.

However, due to incessant rains experienced in Colombo and Sri Jayewardenepura Kotte, the Diyawanna Oya adjacent to the Parliament complex has reached spill level. However, since the rainy weather is expected to continue tomorrow as well, water levels are expected to increase.

The two spill gates in Karuwalagaswewa Thabbowa reservoir were also opened yesterday as the water increased to spill level, the released water will flow from Nari Oya to Mee Oya.

The Road Development Authority also added that inundated roads in the South were gradually slearing and transportation and mobility will soon be established. However, the Akuressa-Kamburupitiya route still remains inundated obstructing vehicular movement.

Speaking to Ceylon Today, RDA Director General, Rohitha Swarna noted that soil erosion of the river bank on either side of the Biyagama-Kaduwela Road will not impact the bridge. Engineers were however, constantly monitoring the situation to prevent further damage.

The bridge was closed and vehicular movement was restricted from 10p.m. to 5a.m. yesterday, while a temporary bridge was being erected.
Meanwhile, the Navy has deployed 45 units on standby and are assessing the situation. “We are working under the directive of the Chief of Defence Staff,” Navy Spokesperson, Commander Dinesh Bandara,   said.