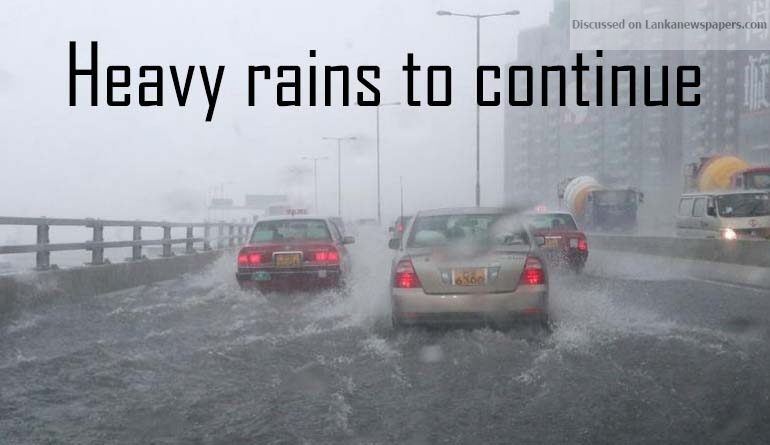 Heavy rains, and floods continue to wreak havoc as the South West monsoon continue to hit the south western part of the country today (24) and tomorrow.

The number of lives claimed by the adverse weather has reached 11 and approximately, 7,526 families have been evacuated into 194 welfare centres due to flood and landslide risks, according to the Disaster Management Centre (DMC).

More than 100,000 people have been affected by the rains, with many evacuated to safe locations and temporary shelters. Railway and bus services of several areas have also taken a beating, with many lines inundated or damaged due to the rains.

The Meteorology Department yesterday predicted heavy rains, about 100-150 mm at some places in Sabaragamuwa, Western, Central and North-western provinces and in Galle and Matara districts and fairly heavy falls, about 75mm at some places in Jaffna, Vavuniya and Mullaitivu districts.According to the Irrigation Department, water levels of several major rivers were decreasing as at yesterday morning as the recorded rainfall was minimal in the major river catchment areas on Tuesday.

Director of Irrigation – Hydrology, Eng. Mala Alawathugoda told the media at the DMC that water levels across most of the rivers were receding, however, at certain locations, the water levels were rising. She said, the marking on the water gauge located in Nagalagam Street for the Kelani River is increasing and the situation can be classified as a flood situation.

Assistant Director of the DMC, Pradeep Kodippili requested the people to be responsive to the warnings issued by the National Building Research Organization (NBRO) and prepare themselves with disaster packages with only the essential valuables to evacuate when needed.

The DMC said that the dam leak was identified in Pulachchikulam tank in Puttalam District and settled with sand bags. Vijaya Katupotha tank and Waama-Eliya tank has been damaged due to massive rainfall on Monday (21).

Two spill gates have been opened in the Rajanganaya Reservoir due to the rising water level. DMC advises people living downstream to remain vigilant in this regard.

Meanwhile traffic has been restricted on the bridge connecting Biyagama and Kaduwela due to a high risk situation owing to the prevailing adverse weather condition. Accordingly heavy erosion of soil has occurred along the Kelani River banks and underneath the bridge causing fears regarding its structural strength.

The Road Development Authority (RDA) said that a team of engineers have been sent to the location to inspect damage.